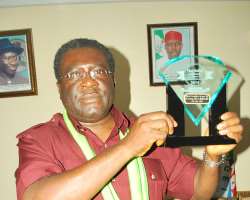 The Voice Magazine, a Pan-African publication based in The Netherlands in celebration of their 15th year anniversary, honored many outstanding sons and daughters of Africa. The prestigious award ceremony which is the biggest African event in The Benelux region of the Central Europe was held in The Netherlands on the 17th October 2014. The deputy governor was not disposed to attend the ceremony because of call to duty, hence, the special investiture ceremony at Owerri.

He dedicated the award to his boss, His Excellency, Owelle Rochas Okorocha for granting him the enabling environment to make his contributions to the state. He also dedicated the award to Imolites, especially the Imo youths who have supported and encouraged his efforts in delivering services to the state and humanity. The deputy governor stated that hard work, humility, dedication to duty and overwhelming love for humanity has endured him to his people.

Prof. Okee Okoro, Imo State Commissioner for Petroleum, used the platform to extoll the amiable virtues of the Deputy Governor, emphasizing that his humble nature should be the model of our youths.

The Managing Editor of the Magazine, Mr Henry Oduenyi praised the humanitarian work of the Deputy governor through his NGO to the less- privileged and the African youths.