Tambuwal accepts presidential nomination form from Reps, says he will continue with consultations 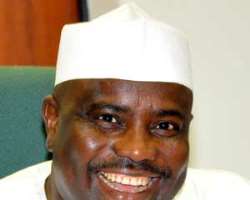 Speaker of the House of Representatives, Mr. Aminu Tambuwal, on Friday, publicly accepted the All Progressives Congress presidential nomination form purchased for him by some members of the House.

The presentation took place about 5.09pm at Tambuwal's residence in Maitama, Abuja.

The speaker gladly accepted the form amid cheers from the lawmakers, who were largely APC legislators.

However, after thanking them for considering him fit for the office of the President of Nigeria, Tambuwal said he would continue with his nationwide consultations on the issue.

'I have accepted to collect this form.
'I will go back and conclude my consultations.
'When I conclude the consultations, I will give Nigerians my final position on this matter soonest.'

While thanking the lawmakers for the gesture, the speaker said it was a demonstration of 'true love for the progress and unity of Nigeria,' he stated.

The Speaker recalled that in 2011, the same scenario played out when his colleagues in the House picked him to serve as their Speaker.

Earlier, a lawmaker from Ebonyi State, Mr. Peter Edeh, presented the form to Tambuwal on behalf of his colleagues.