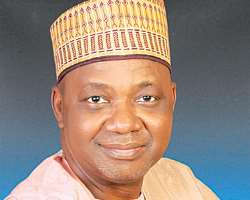 While submitting the form, Sambo said that he was happy that his principal had changed the country since he assumed office.

'Our President has moved the country forward by transforming it economically. It is therefore with great humility that I'm presenting to you these forms.

'Help us to present these expression of interest and nomination forms to the members of the National Working Committee.'

He, therefore, handed over the forms to Mu'azu, who in turn handed them over to the National Organising Secretary, Alhaji Abubakar Mustapha.

In his reaction, Mu'azu reiterated the decision of the party to make the President the sole candidate of the party, adding that the endorsement given to him was a sign 'of confidence by men and women in the party and in the country.'

Among those who accompanied Sambo to the national secretariat were the Senate President, David Mark; Deputy Senate President, Ike Ekweremadu; Deputy Speaker, House of Representatives, Emeka Ihedioha and the Secretary to the Government of the Federation, Sen. Pius Anyim.

Governors of Akwa Ibom, Gombe and Bayelsa states were also in attendance with some ministers