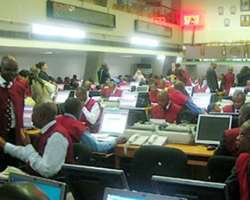 
Nigeria's currency has come under pressure in the past two months from falling global oil prices, dampening appetite for assets in Africa's biggest economy and chief oil exporter.

Though the central bank has been intervening this year to prop up its value, the naira has lost 4.3 percent since Jan. 2.

Foreign investors pulled more money out of the stock market on Tuesday, mainly in the relatively liquid banking and cement sectors, as the oil price fell 3 percent to a four-year low of just above $82 a barrel and as Nigerian companies reported mixed results.

The naira, which had earlier lost 0.3 percent intraday against the U.S. currency as funds repatriated cash, recovered some ground after the central bank intervened to close down 0.1 percent at 165.90 to the dollar, dealers said.

The local unit of Italian oil firm Eni sold $25 million alongside the central bank to support the naira.

But this year Nigeria's stock index is down 9.6 percent.