How I Maintain My Hips, Sexy Curves—Daniella Okeke 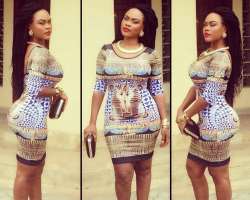 It is unarguable that when it comes to the topic of big booties holders in the movie industry in Nigeria, one actress that has got all it to the envy of others is no other than Daniella Okeke. The voluptuous actress has caused stirs on social media, red carpet events and in movies with what she is blessed with.

Nollywoodgists.com met her at a recent event and we couldn't help but ask her how she manages to stay focused with different men staring at her 'weapon of mass destruction' as well as her secret beauty tips.

The sultry actress, who hails from Imo State, and also a Fine and Applied Arts graduate of Delta State University, revealed that she always looks sexy and cool and never shy about flaunting what her mama gave her.

"I'm not a shy person. I have to keep being cool and sexy. I take lots of water to stay in shape. I have also been quite busy lately, jumping from one set to another. But it hasn't in any way affected how I look," she told Nollywoodgists.com.

Speaking on what she has been doing lately, Daniella said, "I just released my new movie, 'I Think He Loves Me', starring Brayan Okwara, Jim Iyke, O.C Ukeje and myself. The movie is already online. I hope to come up with more movie productions soon. It's not easy to crossover from being an actress to a producer, but in all, it's worth the stress."

Daniella starred in Desmond Elliot's movie 'Lagos Cougars' and has acted in several other movies including 'Show Me Heaven', 'Indecent Desire', and 'The Evangelist'.

However, it's not her acting skills that has people buzzing but her sexy curves and behind.