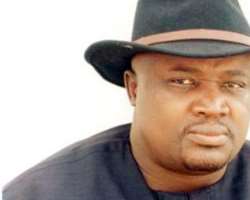 A former Deputy Governor of Bayelsa state, Mr Peremobowei Ebebi narrowly escaped death when the boat he and his supporters were in capsized on the Forcados River, a tributary of the River Niger on Saturday.

According to a source, the incident occurred when they were coming from the ward congresses of the Peoples Democratic Party (PDP) held at Ekremor, headquarters of the Ekremor local government area when the boat was hit by another boat throwing all the occupants of the boat into the river.

Ebebi was among those that swan to safety but four persons were feared killed by the accident.

It was gathered that the incident occurred at about 5pm along the Ekeremor waterways after they were returning to Yenagoa at the end of the congress.

When our correspondent contacted the deputy police public relations officer, Lawrence Eboka, said he has not been briefed about the incident as he was at the home of President Goodluck Jonathan on special duty.