The Faceless Save Abia And Their Murky Plots 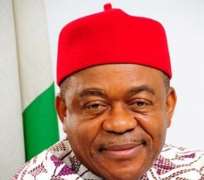 The faceless Save Abia Group emerged overnight with publications armed with false photographs on The Nation newspaper of October 24th. They shifted to Thisday Newspaper on Tuesday 28, same month with another publication on page 57.

Going through the disjointed sentences and phrases, it was highly evident that they lacked vision and therefore presented a coterie of lies and false claims.

These are not surprising as they were foretold like prophecies of the good book. On October 1st, in the Michael Okpara Auditorium, Umuahia, where Abia State Government marked the independence day celebration in style, which took the mode of thanksgiving as nine Abia sons and a daughter were for the first time honoured in the largest number by the President and Commander in Chief of the armed forces, President Goodluck Ebele Jonathan with National Awards in the 2014 edition.

Many of the recipients who were around like Hon Arua Arunsi and Dr. David Ogba spoke in appreciation of the gesture by the Chief Executive of Abia State, who staged the gathering. His Excellency Chief T. A. Orji spoke last. He prognosticated that election time was approaching when 'friends will become enemies and enemies friends. So many things will be said, bulk of it will be damaging lies but people should remember that there will be a judgment day when we will give account of all we that did.'

This pontification took just 23 days to become reality not even waiting to the end of the month of October. This vindication came too soon for Chief T. A. Orji as complaints have risen from inconsequential quarters about the constitution of the Abia PDP primaries committee and unfounded accusations of using cronies and family members etc.

It will not be out of place to ask: Is T. A. Orji the Party Chairman who set up the committee or should Barrister Nwaka have selected Orji Uzor Kalu as the chairman or one of the members for the faceless group to feel good?

Photographs purported to be Aba roads were used as evidence. Questionable as these were, the main Agbama Road that leads to the estate was constructed by Ochendo. In their hurry to smear Abia leadership, they forgot this fact and nobody has commended the much done but just as the drowning men that they are, grabbed the internal roads as straws.

The negative publication in all intent spells evil and doom. When they bemoaned the presence of gullies on all roads leading into Abia, they seem to forget that all inter-state roads are federal roads. They quickly cited Arthur Eze and the falsely credited speech. Eze though not a superior authority on issues in Abia did not speak of Abia roads but actually complained about the express road from Enugu to Umuahia which he plied on his journey.

According to their claims that graduates are being turned to touts, but the Save Abia and their likes previously claimed that the cars were not free or that people were getting it on hire purchase. They may have even forgotten that their acolyte gave out barrows and shovels. Well, the truth is that the empowerment cars are not compulsory; the recipient is free to employ a driver. On the other hand, most of our folks drive taxis in New York, London and Paris and repatriate money home.

Most of our self-made men today drove taxis belonging to other people in their humble days. It was actually such situations that provided the springboard for success.

Questions that boggle the mind are: what have this Save Abia Group been doing since and only came out on election eve. They have not commended the Governor ever since he has been toiling, providing health centres, building 100 bed hospitals in ten LGAs. They have refused to see Abia Specialist and Diagnostic centres, legacy projects. They would rather not believe that markets were moved and new ones created.

Aba has gotten more attention from T. A. Orji much more than all the governors in the history of the state put together. Where were Save Abia when this state was pocketed by one family? When Aba was sacked by kidnappers and armed robbers, what did they do? Did they as much as raise a voice in ululation or hooting, but now, they have strength and money to pick up pages of calumny.

They talked of Arthur because he fills the blackmail mould. What about the visits of the Good Governance Tour of January 2013, led by Lebaran Maku that gave Abia a pass mark? Olisa Metuh's PDP performance media tour three weeks ago spoke of the conspiracy against Abia after moving to some project sites where they saw wonders. Journalists and religious sects have come and all acclaimed. Ochendo's works are imposing and dwarfing, little wonder, Save Abia imported photographs to hoodwink the unsuspecting people.

If Save Abia and their friends have some facts, they should have named the candidate or candidates that are being followed about by government appointees, or even name the government officials that are aiding these aspirants.

From the look of it, Save Abia and group have a candidate in mind and have broken the rules by having started campaigns before the approved time. Shame on Save Abia for placing their selfish interest before the collective aspirations of Abia.