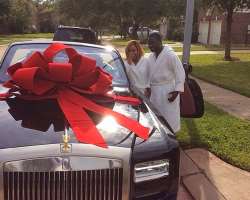 At the mention the name Ayiri Emami, the first thing that comes to the mind of anyone well acquainted with the Warri-based billionaire oil tycoon is nothing less than a luxuriant.

Just few days ago, the man of wealth, surprised his wife with a N75 million Rolls Royce as birthday present.

The birthday wife woke up to a bling Rolls Royce Phantom Drophead, she couldn't have wished for a better birthday.

Dressed in white bathrobes, the couple walked to their front door to receive the gleaming $470,000 marque.

Topping it all, he also staged a birthday soiree for her at Del Frisco's Grille in Houston, Texas (United States of America).

The beautiful Asba, whom he walked down the aisle at a lavish three-day ceremony in December 2009, couldn't hide her joy.

His bachelor's eve was graced by the likes of Chief James Ibori, Pastor Ayo Oritsejafor and Richard Mofe Damijo, Nollywood actor and Commisioner for Culture and

Baba led comedians, including Basketmouth, as well other legions of Niger Delta movers and shakers graced the epoch making event which was hosted in three cities – London (United Kingdom), Lagos and Warri (Nigeria).

It was also speculated that Ayiri Emami sent a huge donation for 2Face and Annie Macaulay's March 23,2013 wedding in Dubai (United Arab Emirates).

Reports had it that he bankrolled the nuptials, which he attended in grand style.