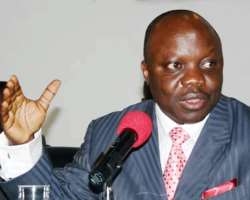 What was supposed to be a peaceful poll in the local council of Delta State governor, Emmanuel Uduaghan, Warri North, turned violent yesterday at the headquarters, Koko, over a dispute following alleged disappearance of result sheets.

In the melee at the Divisional Police headquarters, the office of the main opposition All Progressives Congress (APC) was vandalized by thugs reportedly on the order of one of the top members of a rival party while over 20 people sustained various degrees of injuries and several vehicles were damaged.

The APC State Organizing Secretary, Mr. Aghorimoye Mene, tried to explain why there was mayhem in the council and why election could not hold. He said that the result sheet for the council was allegedly removed on Friday night by agents of the ruling People's Democratic Party (PDP).

The election which was scheduled for 8am with accreditation and voting starting by 12pm going by the guidelines of the Delta State Independent Electoral Commission (DSIEC) apparently did not take place, as the vehicle managed to slip out of the police headquarters to an unknown destination at exactly 1.20 pm under armed escort by soldiers.

Mene insisted that not until the party agents inspect the result sheets and other election materials they will not allow the mini bus carrying the materials from the capital in Asaba to leave the premises of the Divisional Police Headquarters at Koko, the council headquarters.

He said: 'There is just no way we can have a free and fair election in the absence of result sheets. We will not allow election to take place except we are shown the result sheets. The people's votes must count this time around.'

The police station was a bedlam as youths, men and women who defied the presence of a combined team of heavily armed soldiers and policemen surrounded the fenced compound and threatened to vandalize the vehicle, which contained the materials.

The thugs, armed with assorted weapons who came from different directions seemed to have broken the deadlock when they swooped on the charged environment attacking the aggrieved crowd, which was made up of mostly supporters of the opposition party.

Meanwhile, according to a statement by the Delta State Government, Asaba, yesterday, Uduaghan hailed the elections as one of the best organised polls.

Speaking in his Abigborodo hometown shortly after casting his vote at Unit I, Ward 6, located at Abigborodo Primary School Polling Station in Warri North Local Government, the governor said reports he received indicated that the exercise was largely peaceful in all parts of the state.

He said there were hitches, delays and security situation which were promptly dealt with to enable the people exercise their franchise.

The governor commended the people of the state for keeping faith with the exercise and expressed happiness that all went well.

Commenting specifically about the exercise in Warri North, Uduaghan said certain elements wanted to disrupt the exercise but that security personnel were called in to handle the situation.

He also expressed happiness at the huge turn out of voters for the exercise and urged the people of the state to remain peaceful. The Guardian