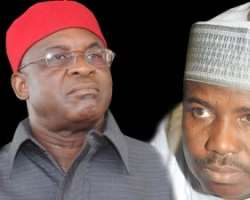 The House of Representatives clarified on Thursday that the National Assembly did not remove labour matters from the Exclusive Legislative List, contrary to reports making the rounds.

The Deputy Speaker of the House, Mr. Emeka Ihedioha, made the clarification amid threats by organised labour to embark on strike over the matter.

Ihedioha, who is the Chairman, House Committee on Constitution Review, explained that both the Senate and the House retained labour on the Exclusive List when they passed the new amendments to the 1999 Constitution.

However, it noted that it was the Senate that initially moved labour to the Concurrent List in its own report, while the House retained it on the Exclusive List.

Part of a statement he issued to clarify the issue, read, 'It has become necessary to clarify that the Conference report of the Constitution Review Committee recently adopted by the Senate and House of Representatives did not remove labour from the Exclusive Legislative List.

'The Senate had earlier put labour on the Concurrent List but the House retained it in the Exclusive List.

'During the Harmonisation of the Reports from the two chambers, the Conference Committee adopted the House version and retained Labour on the Exclusive List.

'Both the Senate and the House of Representatives have now adopted the Conference Committee Report, which retained Labour on the Exclusive Legislative List.

'We are at a loss as to where the false and misleading information on this matter emanated from.'

The General-Secretary of the NLC, Dr. Peter Ozo-Eson, and the President-General of the Trade Union Congress, Mr. Bala Kaigama, warned in two different statements on Thursday that labour would organise a mass protest against the action which they said was condemnable and unpatriotic.

Ozo-Eson stressed that the NLC would mobilise workers against the attempt to scrap the National Minimum Wage.

The NLC secretary said that the organised labour was surprised by the sudden decision to move against the National Minimum Wage after the assurances from the Senate leadership.

Ozo-Eson urged the National Assembly to reverse the decision in the interest of Nigerians because of its implications for the country.

He said that the decision to remove the national minimum wage was 'extremely dangerous and retrogressive' as it would empower employers to fix their own minimum wage.

The NLC secretary, who said that an emergency meeting of NEC had been called for Monday on the issue, stated that the move against the national minimum wage was a deliberate plot of some persons to truncate the current electioneering process.

He said, 'The Nigeria Labour Congress condemns in strong terms the removal of wages from the Exclusive List to the Concurrent List by the National Assembly in the ongoing fourth amendment exercise to the 1999 constitution.

'We at the congress see the removal of wages from the Exclusive List as an act of treachery masterminded by conservative governors and their cohorts in the National Assembly, which will do the polity no good.

'We wish to state in no uncertain terms that the Congress will mobilise its members to resist this move to scrap the national minimum wage. We recall that last year our national campaign and mobilization on this subject matter was suspended at the instance of the leadership of the Senate which promised to revisit the issue now that they 'are better informed…' - Punch.