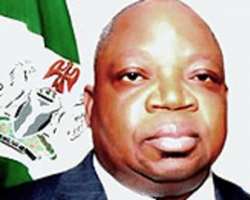 The country's revenue fell by N99.55bn in the month of September, thereby causing the three tiers of government on Wednesday to share N2.7bn that should have been transferred to the Excess Crude Account.

The Accountant-General of the Federation, Mr. Jonah Otunla, said the technical meeting of the Federal Accounts Allocation Committee that held earlier had suggested the sharing of the $2.7bn, which ought to have been transferred to the ECA that was established to provide a buffer for the country in the face of fluctuations in international crude oil prices.

Not satisfied with the revenue, which accrued to the Federation Account for the month of September, the Commissioners of Finance from the 36 states withdrew from the meeting and engaged in consultations for a few minutes before returning to the general FAAC meeting.

Upon their return to the meeting, they rejected the amount available for sharing and demanded for additional augmentation from the ECA.

Otunla, in a statement issued after the meeting, said, 'The gross revenue of N502.09bn received for the month was lower than the N601.65bn received in the previous month by N99.55bn. The further decline in mineral revenue was attributed to the slight decrease in crude oil prices and production loss due to the shutdown of the trunk lines and pipelines at the various terminals.

'Non-mineral revenue decreased partly due to the fact that some blue chip companies had made payments and returns in the preceding month.

'The distributable statutory revenue for the month is N463.79bn. The sum of N36.55bn is proposed for distribution under the SURE-P. In addition, the sum of N6.33bn was refunded by the Nigerian National Petroleum Corporation. The total revenue distributable for the current month, including VAT, is N603.53bn.

'Reports of revenue collection agencies and military pensions were read and adopted. It was suggested that in addition to the N30bn revenue receipts from the NNPC, the sum of $2.76bn meant to be transferred to the ECA be distributed to augment the shortfalls in revenue.'

The Minister of State for Finance, Mr. Bashir Yuguda, however, denied that the ECA accrual was shared but said the ECA balance remained $4.1bn.

Giving some economic indicators at a press briefing in Abuja on Tuesday, the Minister of Finance, Dr. Ngozi Okonjo-Iweala, had said the country's External Reserves had risen from $36.6bn as of June to $39.48bn as at October 16.

She put Excess Crude Account balance at $4.11bn and the Sovereign Wealth Fund at $1.55bn.

These are buffers that the government rely on to augment what the three tiers of government share when revenue slumps.

Okonjo-Iweala had hinted at a press briefing that revenues were falling as a result of declining oil prices in the international market.

Consequently, she added, the Federal Government had raised the revenue targets to be collected by revenue agencies, including the Federal Inland Revenue Service and the Nigeria Customs Service.

'Shale oil production in the United States and sluggish demand from Europe and Asia are putting downward pressure on the demand for crude oil.

'In spite of the global uncertainty, our economy continues to evolve with dynamism, stability and resilience, riding on sound macroeconomic management even in the face of oil price and quantitative shocks.' - Punch.