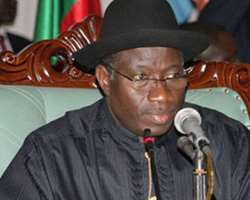 Apparently in response to criticisms of government by some opposition governors over who gets the credit for the roll back of Ebola Virus Disease (EVD) in the country, President Goodluck Jonathan has explained that the 'buy-in' of Nigerians into the campaign was responsible for the success in tackling the outbreak.

Therefore, he said no government should claim credit for the feat.

Governors Babatunde Fashola and Rotimi Amaechi of Lagos and Rivers states, respectively affected by the outbreak, had separately chastised the Federal Government for claiming credit for the disease control.

But speaking while launching the Tony Elumelu Empowerment Fund at the Presidential Villa, Abuja, on Thursday, Jonathan regretted people's attempt to play politics with the issue and credited the success recorded to the Nigerian people.

He observed that the fight against the virus succeeded because Nigerians heeded the campaign of government to do the right thing to prevent infection.

Talking about recent successes, Jonathan said: 'The most recent one is our ability to manage Ebola. People are trying to play politics with it which is quite unfortunate. But we had assistance from international donors. Our development partners participated in terms of giving protective gear and various suggestions.

'The Federal Government did a lot of things in terms of logistics, moving people from one part of the country to the other, quarantining people within their residences and getting doctors or medical experts to follow up.

'But the key thing that made the government to succeed is the buy-in by the ordinary Nigerians.'Even the saluting by shaking people, across, all those were suspended by religious organisations within that period. Nigerians became mindful, friends stopped embracing themselves, saying until we get out of Ebola. 'There is no magic government would have used to solve that problem. No President or state governor will claim any credit. The credit should go to the ordinary Nigerians for the cooperation and buy-in.'

Recalling that Victims Support Fund was recently launched for victims of Boko Haram insurgency in parts of the north, the president noted that the Elumelu Empowerment Fund was welcome to partner with government agencies and relief organizations to ameliorate the consequences of conflicts.

According to him, 'While government continues ?her immense security operations to eliminate the threat and to restore law and order, we recognise that the assault on that region has all but destroyed infrastructure, displaced population and arrested economic activities.

'Rehabilitating those communities will require interventions not just from the government alone but also from the private sector. I'm therefore pleased to see that the Tony Elumelu and our industry and private sector leaders, stepped up to the occasion by contributing significantly ?to the victims support fund.

'Their kind gesture was a clear demonstration of how much the private and public sectors can achieve in working together for national transformation.

'Following the example set by the victims support fund, the Tony Elumelu Foundation has now created the Nigeria Empowerment Fund to provide interventions that would rebuild the economic resilience of local communities affected by conflicts and natural disasters.'

Jonathan expressed the hope that when the Boko Haram insurgency was sufficiently brought under control, 'and we move in to re-develop and re-construct? these devastated community, people will be happy, posterity will judge government right.'

The Elumelu Empowerment Fund will provide interventions focused on the medium and long term needs of post-conflict and post disaster communities.

'This will be achieved by revitalising their socio-economic and environmental fabric as it relates to the four core pillars – social welfare, enterprenurship, reconstruction and environmental management,' Jonathan said.

The president announced that he federal government would support the fund with the some of N250million.

In his address at the occasion, the chairman of the fund, Mr. Tony Elumelu, explained the need for the fund, noting that many years after being afflicted by conflict or natural disasters, many communities were still struggling to overcome the additional challenges brought by the devastating events.

'Therefore, the rest of us, particularly those in the private sector, have a responsibility to turn these tragedies into an opportunity to change the outcome and the narrative, for the good of the survivors and our entire Nigerian family,' he stated. - Nigerian Tribune.