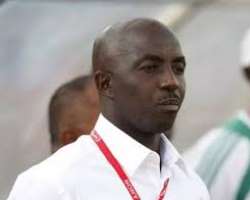 Nigeria Football Federation, NFF, has appointed former Super Eagles Coach Samson Siasia as the new coach of the Under-23 team.


The NFF took the decision at its Executive Committee meeting which held yesterday and lasted till the wee hours of Thursday at Transcorp Hilton, Abuja.

The last time Siasia held that position he won silver at the 2008 Beijing Olympics, losing 1-0 to Argentina in the soccer final, a goal scored by Angel Di Maria for the Argentines. Agency report