I Will Retain My Low Cut Hairstyle—Uche Jombo 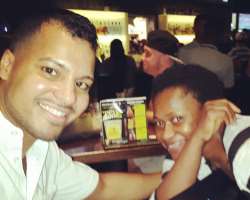 Nollywood actress, Uche Jombo, who is currently heavily pregnant with her first child, has said she intends to keep her low cut hairstyle for a long time because of the troubles associated with different hairdos of women.

The actress stated that she does not know how to twist or braid her hair because she enjoys pouring water regularly on her hair. Uche Jombo said with her low cut hairstyle, she will not have to scratch or hit her head with her hands as some women do when feeling discomfort.

Responding to a fan's reply, the actress disclosed she would continue to use wig, which can be easily removed at will.

Uche Jombo is currently on the set of a new movie titled 'Folly,' a film produced by Elly Daniels and Ugah.