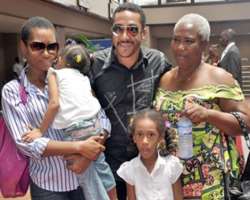 One of the celebrated superstar actors, Majid Michel is presently not in the best of moods and the reason is not far-fetched. The handsome and talented actor, according to reports gathered by Nollywoodgists.com, has lost his mother to the cold hands of death.

The mother of the 2012 AMAA Best Actor winner, aged 63, we learnt gave up the ghost last week in a Ghanaian hospital after he was taken there for treatment.

The aged woman was reportedly rushed to the Ghana Canada Hospital, located in East Legon in Accra, Ghana, where she later died. We heard the family is mourning the demise of the woman, who some said was greatly loved by her family members.

Majid, after winning his way into the hearts of movie buffs in Nigeria, became a household name in the West African region. He is a superstar actor in his native Ghana. He is one of the hottest actors in the country.