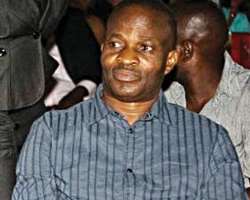 The former Deputy Governor of Enugu State, Sunday Onyebuchi who was recently impeached for “chicken related offenses” has returned into the state government coffers, a September 2014 salary paid to him as deputy director in the civil service, which he described as a 'Greek gift'.

Expressing surprise that government paid into his account the sum of N61,067,26 as salary for September 2014, when he did not work anywhere, Onyebuchi stated that he disengaged from civil service in 2007 to contest elections and had never asked to be reabsorbed.

In a letter to the Secretary to state government, which was sighted by our correspondent, dated October 8, 2014  titled 'Refund of money mischievously paid to me', in which he attached treasury receipt of the state government indicating the refund, he described the 'haste to dash' him salary for job not done as 'merely preparatory to some other sinister step which will soon be disclosed'.

He recalled that he had on September 5, 2014 in his reply to the letter conveying his deployment, reminded the state government that he disengaged from civil service of Enugu state in 2007 in compliance with the constitutional requirement to be eligible to join a political party and contest elections.

'I further explained that your letter deploying me to your office was baseless. It is therefore a surprise that you went ahead and paid into my account the sum of sixty one thousand and sixty seven naira, twenty six kobo (N61,067.26) as salary as fraudulent as I did not report for work anywhere, did not work anywhere and therefore did not earn any salary.

'It is unfortunate that even though I have been deliberately denied of my allowances as deputy governor for the months of July and August 2014, there has been an indecent haste to 'dash' me a salary for the month of September 2014, for a job I ceased to hold as far back as 2007.

'Although I believe that the unearned salary was paid to me in bad faith, I have returned it in good faith. See attached Enugu state treasury receipt no. 000796193 as evidence of the refund.  I advise that you stop any further payments of unearned salaries into my account as this amount to fraud'