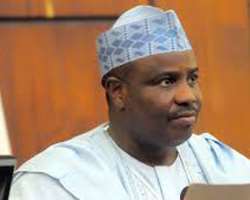 Barring any last-minute changes, the House of Representatives will this week begin the clause-by-clause consideration and voting on the final report submitted by Deputy Speaker Emeka Ihedioha-led adhoc committee on constitution review.

Fears had heightened that the report of the panel may have been marred by a credibility crisis.

However, with the conclusion of the national conference and the report submitted to President Goodluck Jonathan on August 21, 2014, this week's move by the chamber, The Guardian learnt, will therefore pave the way for the emergence of a new constitution.

Indeed, indication that the parliament is inclined to accommodate key resolutions of the national conference emerged recently when, last month, the House of Representatives on September 17, 2014 began what was seen as a move that may lead to the amendment of Section 9 of the 1999 constitution to provide for a referendum in the enactment or alteration of a new constitution.

A bill to that effect has already been listed to be debated by the members and may be given accelerated consideration. The proposed amendment legislation is titled, 'a bill for an act to amend Section 9 of the constitution of the Federal Republic of Nigeria, 1999 to make provision for referendum in the alteration or enactment of a new constitution.'

The House of Representatives had on July 24, 2013 voted on some constitution amendment clauses where several decisions were taken in tandem with the yearnings, wishes and aspirations of Nigerians collated from the historic Peoples Public Sessions conducted in November 2012.

Some of the highlights of that July 24 voting included financial and administrative autonomy for local government councils (including denial of revenue to unelected councils and creation of a uniform four-year tenure for elected ones); financial independence for state legislatures; removal of immunity against criminal prosecution for the president, vice president, state governors and deputy governors; justiciability of parts of the Chapter IV of the constitution relating to free basic education, basic housing, and free primary and maternal healthcare services;  splitting of the office of accountant general of the federation and accountant general of the Federal Government; among many novel amendments.

On January 30, 2014, the House devoted its entire attention to conduct a vote on the bills. A mock voting session was conducted two days earlier for members to familiarise themselves with the electronic voting procedure.

The voting was electronically conducted; the process was open, and generally without hitches as members exercised their rights without let, favour or pressure on the clauses slated for determination.

Of the 19 clauses voted upon, 18 passed the minimum of two-thirds majority of 'yes' votes to become successfully amended by the House of Representatives.

The clauses which scaled through received more than the required number of votes needed to become amendments to the constitution, thus reflecting the near-unanimity of purpose of members on almost all the issues for amendment.

The voting further reinforced the diligence, hard work and persistence of the ad hoc committee on the constitution review as duly noted by the Speaker of the House, Aminu Waziri Tambuwal who praised the deputy speaker for providing firm and good leadership, noting that he did not receive any complaint from any member of the committee and that the successful culmination of the review process in the House reflected the unity of purpose displayed by Ihedioha in piloting the affairs of the panel.

Ihedioha said his position was predicated on the promise made by the Seventh Assembly that the House would make the process of the entire constitution amendment transparent, inclusive and accountable to the Nigerian people.

'This process may not be perfect, but I dare say, that it is the first time in the history of this country that Nigerians at the grassroots have been made part of the constitution review process in a practical and transparent manner.

'We promised Nigerians that we shall be transparent and accountable. Indeed, we made a commitment to do things differently in our legislative agenda, unveiled at the beginning of the Seventh House of Representatives. And that the outcome will be a fulfillment of this commitment and promise.

'We have responded as best as we can within the limits of the constitutional and legal framework to the demands of Nigerians for greater voice and involvement in the constitution amendment process.'

The deputy speaker had described the successful voting on outstanding bills on the constitutional review on the floor of the House as a triumph of democracy and demonstration of the resolve of the House to always put national interest above all other considerations.

He also commended his colleagues in the House for rising up to the challenge and displaying patriotism where they put behind their individual, political, demographical and ethnic differences to vote on the clauses in an objective manner and in favour of the national interest.

The process adopted by the House to alter the constitution, is said to be very painstaking and methodical. Observers of events in the lower chamber are all agreed that the exercise is perhaps the most inclusive and consultative process ever undertaken by the House of Representatives.

With alterations made to about 71 Sections of the Constitution by the House of Representatives, the amendments if adopted as part of the nation's constitution would represent the single largest amendment of any Nigerian Constitution in history and will truly reflect the will of the people.

The key amendments that have been made include:

. Amendment of Section 4
The House voted by 301 for, none against and no abstention to insulate members of the legislature from civil or criminal proceedings in respect of words spoken or written before the House or a committee.  This is aimed at ensuring that members of the legislature are not made liable for contributions made on the floor and at enhancing robust legislative debates by lawmakers.

. Section 7 – Local Government System
The House voted by 284 for, 48 against and seven abstentions to amend Section 7 of the 1999 Constitution. Many states at various times do not have democratically elected local government councils.  To check this, the House voted overwhelmingly to grant full financial, administrative, executive and legislative autonomy to local government councils (LGCs).  By this effort, the LGCs would be made a tier of government having a uniform our-year tenure.  Also, any LGC that does not have democratically elected officials would be denied allocation from the Federation Account and other benefits from the state government.

. Amendment of Section 8
Section 8 was amended by 305 votes for, 22 votes against and 12 abstentions in order to remove ambiguities in the process of creation of new states and boundary adjustment.  The referendum required for a new state shall now be approved by at least two-thirds majority of the 'registered voters' of the local government areas where the demand originated from, instead of the current provision of approval by 'two-thirds majority of the people of the area' which is ambiguous and subject to different interpretations.

The amendments also made it clear that only 'democratically elected' officials and council can perform the roles assigned in the constitution for creation of local governments, states and boundary adjustment.

. Amendment of Section 9
Section 9 was amended by 317 votes for, six against and 15 abstentions which met the 4/5 majority required to amend the section. The amendment sought to replace an 'Act' with a 'Bill' thereby enabling the process to proceed without presidential assent.

. Amendment of Section 25
Section 25 was amended by a huge majority of 292 votes for, 27 against and 20 abstentions to confer on married women the opportunity to elect to acquire indigeneship rights either of their husband's community or to retain those of their paternal community.  It also conferred indigeneship rights of a state to a Nigerian citizen who has resided in a particular community of a state for a continuous period of not less than 10 years. The amendment is aimed at accommodating the reality of movement of persons, change of domicile and intermarriages in modern Nigeria.

The House voted overwhelmingly to amend the named sections where the term 'Nigerian Police Force' appears and for it to be replaced with 'Nigeria Police'. The rationale was to emphasise the civil nature of policing, rather than celebrate 'brute' force.

. Amendment of Section 42(1)
This section was amended to include 'disability' as a ground under which a person should not be discriminated against.

. Amendment of Section 45
Perhaps one of the most revolutionary amendments is the introduction of new sections 45A - 45D.  By this, four items currently under Chapter 2 of the Constitution on the fundamental objectives and directive principles of state policy were moved to   Chapter 4 on the Fundamental Human Rights in order to make them justiciable.  The House voted overwhelmingly to provide for a right to free basic education; right to a favourable environment; right to free primary and maternal health care services; and right to basic housing.

. Amendment of Section 58
This amendment dispenses with the requirement of the assent of the president where he fails to signify that he assents to a bill or withholds assent, as it was felt that 2/3 majority votes of the National Assembly and 2/3 of the entire Houses of Assembly were sufficient for the purpose of determining the will of the Nigerian people.

The House voted overwhelmingly by 313 for, eight against and 12 abstentions to endorse independent candidacy in elections in order to further open up the political space.  To ensure that the provision is not abused, Section 228 was amended to introduce a new Section 228(e) which states that 'The National Assembly may by law provide for procedures, guidelines and qualifications for access to the ballot by political parties and independent candidates.'

. Amendment of Section 80(4) and 120(4)
The House voted by 325 for, two against and 12 abstentions to replace the above sections with new ones that completely captures appropriation of any form of revenue accruing to or derived by any fund, agency, entity or department of government of the federation or of a state by the National Assembly or a state House of Assembly. This is aimed at bringing some order to the budgetary process and plugging leakages from the Consolidated Revenue Fund and public funds of Nigeria by ensuring that no expenditure is made by any organ of government without appropriation.

Section 81(2) was amended to introduce 'Other Public Funds of the Federation set up for specific purposes' as part of the estimates, which the president must lay before the National Assembly for Appropriation.  In order words, the amendment will ensure that the budgeting of such entities as the Nigerian National Petroleum Corporation (NNPC), the Nigerian Maritime Administration and Safety Agency (NIMASA), Customs and Excise, the Central Bank of Nigeria (CBN), et cetera must now be laid before the National Assembly.

The new section 81(3A) defines the estimate of revenue and expenditure to be introduced by the president to include any form of revenue received or a return on government investment by any agency of government. The House also amended Sections 82 and 122 to limit the period during which the federation or a state may operate without an Appropriation Act in any new financial year. The Guardian