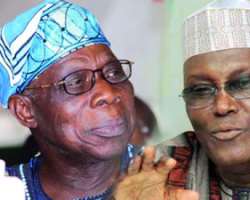 There are strong indications that former President Olusegun Obasanjo may have warned the All Progressives Congress not to field former Vice-President Abubakar Atiku as its flagbearer in the 2015 elections.

Obasanjo, during a recent visit by the APC national leader, Asiwaju Bola Tinubu, to his residence in Abeokuta, was said to have warned the opposition party against fielding an 'unclean vessel' as its presidential candidate in 2015.

An impeccable source, who was at the meeting but did not want his name mentioned, told Saturday PUNCH that last week's visit by Tinubu to Obasanjo was meant to remind the former President of the need to support the APC to realise its ambition of winning next year's presidential election.

The source said, 'Chief Obasanjo appreciated Tinubu's visit to his home, but specifically warned the APC to shut its door against 'unclean vessel.'

'Chief Obasanjo reiterated his refusal to join the APC when Tinubu visited him in his Abeokuta residence, but warned the party to beware of Atiku.

But Atiku's media aide, Garba Shehu, said he was not aware of such comments by Obasanjo against the former vice-president.

Shehu, who said that Atiku had consulted relevant stakeholders on his plan to become Nigeria's president next year, said, 'You can quote me; we are not in any way aware of such comment. What I can say is that the former vice-president has written a letter to his former boss, respectfully informing him of his wish to bid for the APC ticket.'

He also said that Atiku had sent similar letters to other Nigerians.

'These letters, which were personally signed, had gone to thousands of other Nigerians, including politicians, traditional and religious leaders as well as friendly-diplomatic missions.'

Senate President David Mark and Tinubu had last Friday held separate closed-door meetings with Obasanjo. Both Mark and the former Lagos State governor said the issues discussed at the meetings held at the Obasanjo's Hilltop residence in Abeokuta centred on the state of the nation.

Tinubu had told journalists that he had discussion with Obasanjo on 'some of his former boys' who would vie for elective positions in the 2015 general elections, especially the Presidency.

He had said, 'We are here to pay homage to our former President and discuss with him because he has a number of influences in the political sphere.

'We need to talk to find out his thinking about Nigeria and the future. We need to seek his observation on some of his former boys who are running for Presidency in our party.'

Mark had also described Obasanjo as the father of the nation with a wealth of experience.

The Senate President had told journalists after the meeting that he came with his team, including Delta State Governor, Dr. Emmanuel Uduaghan; the Peoples Democratic Party Women Leader, Mrs. Josephine Anenih; and Senator Polycarp Nwite, among others to discuss with the former President and raise some basic issues that affected both the party and the nation.

He said, 'We discussed issues that will move Nigeria forward because Chief Obasanjo's love for Nigeria is unquantifiable. So, we had a good discussion with him.'

Saturday PUNCH also learnt that the former president would support APC in its bid to win next year's presidential election.

Party sources said Obasanjo did not need to defect to the opposition party before he could support it to win the poll.

The APC National Publicity Secretary, Alhaji Lai Muhammed, told one of our correspondents on telephone on Thursday that the recent visit to Obasanjo by Tinubu was part of efforts to ensure that the opposition party got the former President's support ahead of the poll.

Though the APC spokesperson said that he was not fully privy to the topic of discussion between Obasanjo and Tinubu, he said that if the party leader had gone to visit the former President, it was about how the former president could help the opposition party win in the 2015 general elections.

He said, 'I am not fully aware of what they (Obasanjo and Tinubu) discussed. But of course, did you expect they would discuss church matters? Clearly if he went to visit Obasanjo, it had to be about politics and the party. What else would you expect them to talk about?

'That would not be the first time the party chieftains would meet with the former President. There is no secret about it. We want the party to win in next year's elections. That is it.'

'The former President needs not declare openly or defect to our party before he can help us. Someone went to visit him, he was chased out; Asiwaju Tinubu went to visit him and he was entertained. What are you talking about? What does that tell you?'

Obasanjo had in 2013 embraced the APC when some of the party's national leaders and governors elected on its platform visited him in Abeokuta.

The APC leaders then sought Obasanjo's support for the party's bid to win the forthcoming elections.

Tinubu, who hailed Obasanjo's contributions to nation-building, had lamented that the country was divided more than ever.

Tinubu had added that the APC had resolved to rescue Nigeria and appealed to the former President to lead the mission.

He had said, 'You have come out of tribulation and held the highest position in this country. We are here because of your courage. Nobody can say he has information more than you. You have surmounted a number of crises. Nigeria is divided more than before; to realise stable Nigeria, we want to encourage you to continue to speak the truth. We are resolved and determined to rescue Nigeria. We want you as navigator.'

But the Peoples Democratic Party, which apparently sensed that the APC might finally get Obasanjo's full support, on Wednesday, made entreaties to beg the former President.

Obasanjo, a former Chairman of the party's Board of Trustees, had refused to identify with the party following series of disagreements he had with President Goodluck Jonathan and the running of the party.

The former President even as the chairman of BoT of the party shunned the meetings of the various organs of the party, including its National Executive Committee.

But speaking while receiving former Ogun State Governor, Otunba Gbenga Daniel, who defected from the Labour Party to the PDP in Abuja on Wednesday, the National Chairman of the party, Alhaji Adamu Mu'Azu, begged Obasanjo to return to the PDP.

Mu'azu, who was reacting to an earlier apology offered by Daniel, said every member of the party must beg the former President for forgiveness.

He described Obasanjo as a pragmatic leader, who he said hailed from a zone he claimed had produced the best educated people in the country.

Mu'azu said, 'I want to join former Ogun State governor, I want to join my dear elder brother and indeed all the teeming members here to very sincerely apologise to our leader, to our baba, my baba, General, President, Chief Olusegun Obasanjo to forgive us.

'We cannot continue. I know he has been very prayerful. In the Villa, I know he used to pray every morning. Very early, 5:30 to 6am, he is praying.

'And I know he keeps on praying all the time. As we say in our Lord's Prayer: 'Forgive us our sins, as we forgive those who trespass against us'; Baba, you have to forgive us. I beg you in the name of the Almighty God, so that you too can be forgiven. We are your children. We are making mistakes, we have made mistakes, we have apologised.

'We will not agree even if you want to throw the baby away with the bath water, the baby will not go without you.