MAZI CLEMENT OWUNNA: ON A MISSION TO CHANGE OKIGWE ZONE FOR GOOD 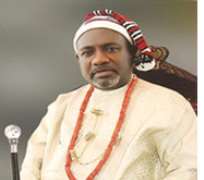 For Okigwe senatorial zone change is in sight. The opportunity to turn round the fortunes of the zone for good is fast approaching. Purposeful and effective representation in the Senate of the Federal Republic of Nigeria will be a reality if Mazi Clement Owunna is elected in the 2015 senatorial election.

As Mazi Clement Owunna steps forward to take up the challenge; the difference, the change, will definitely manifest in 2015 and Okigwe Zone will be better for it. And as seen all over the world, when good people are in authority, the people rejoice.

Mazi Clement Owunna is incredibly fit for the job, a round peg in a round hole. He has for many years and with his own resources been grooming, inspiring and equipping the next generation of leaders. He is a fantastic team play who if elected to serve as the senator, will graciously carry the people of the zone along with him. So, a vote for him in 2015 is a vote for a better, prosperous, secure future for Okigwe Senatorial Zone and Imo State in general.

A consummate and realistic politician, Mazi Owunna has now chosen a formidable political platform, APGA to actualise his dream of creating more jobs and bringing real change to his zone in Agriculture, Industries, Health and Education. And just recently, Human Rights Writers' Association (HURIWA), a Non-Partisan and Non-Governmental Organization (NGO) endorsed him as the best man for Okigwe Senatorial seat.

Mazi Owunna is a straight talking person and service to humanity is his second nature. He is very focused and passionate in his work. He sees leadership as a service. And no doubt, his marvellous and very visible achievements in the business environment he intends to replicate in the public arena.

Nze Owunna's philanthropy is second-to-none. He has through Chief Peter Sunday Owunna Memorial Foundation, (A foundation he established in Memory of his late father in 1993) given free medical treatment to indigent people in and outside Okigwe zone. And not long ago, the Foundation gave free eye care to over 10,000 people, performed 300 cataract operations and gave over 6,000 free eye glasses. Just few weeks ago, the Governor of Imo State, Rochas Okorocha commissioned in Imo State University a 150 million naira Recreation Park built by him under the auspices of Owunna Foundation.

His business background speak volumes. He is the Chairman of many companies with interest in Pharmaceuticals, Cosmetics, Toiletries and Plastics Manufacturing, Corrugated Packaging, Finance, Insurance and Real Estate Development. His contributions to the economic development of Nigeria caught the attention of the former President, Chief Olusegun Obasanjo who in 2002 honoured him with a National Award of Member of Federal Republic (MFR), and in 2007 he was again honoured with National Productivity Order Merit Award (NPOM).

He is also a Member of Pharmaceutical Society of Nigeria (PSN), Harvard Business School Association of Nigeria and Fellow, Nigerian Institute of Management.

As Mazi Owunna sets sail, and using his previous accomplishments as a guide, he is on a mission to build a long lasting partnerships with other Senatorial Zones in Nigeria for the benefit of Okigwe people. Be the change you want on this solid Road to change and Nze Clement Owunna will do the rest for you.