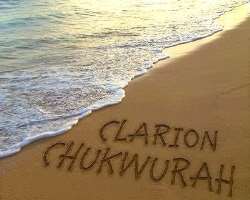 Hollywood is known for various awards like the Oscars, Hall of Fame and many other awards just to appreciate the efforts of their own who has sacrificed their time, skills, just to make movie a reality and interesting.

When many are recognized by writing their names in various categories in Hollywood, Nollywood is yet to have such a platform rather, it is all about politics and no recognition for the hard services to the growth of the make belief industry.

Since she has received various awards in Nigeria without an Hall of Fame, Nollywood veteran actress, Clarion Chukwurah, has decided to write her name on the sand of time where she will be well respected and acknowledged by the wind rather than human.

The actress boldly wrote her name on the sand that even the beach waters could not wash off her name from the sand. Hmm, even the sea now recognizes the actress, other recognition can stay.