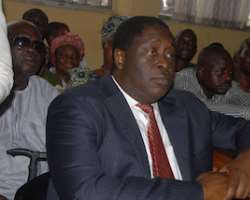 The Asset Management Corporation of Nigeria (AMCON) on Thursday filed an application for injunction to restrain Dr Wale Babalakin from executing a Federal High Court order of Sept. 29.

Justice Ibrahim Buba of a FHC, Lagos, had on Sept. 29, reversed an earlier order by Justice Okon Abang of the same court which granted receivership of Babalakin's assets to AMCON.

Abang, had on Sept. 22, made an order granting receivership of the assets of Babalakin to AMCON's counsel, Dr Olisa Agbakoba (SAN).

The order was made following an ex-parte application by AMCON over alleged N50 billion cumulative debts owed it by Babalakin.

The Chief Judge of the Federal High Court, Justice Ibrahim Auta, however, re-assigned the case to Buba, who was handling previous cases between the parties.

Buba, on 29 September, vacated Abang's order on the grounds that it was clearly an abuse of court process as it was obtained in the face of previous pending cases and specific orders on the same subject matter.

Dissatisfied with the orders of Buba, AMCON, had on 30 September, filed a notice of appeal before the court of appeal, and subsequently on Thursday filed an application for injunction pending the appeal.

According to the applicant, if the respondents are not restrained, their management of the assets may adversely affect its case at the appellate court.

AMCON therefore wants a stay of Buba's order pending the determination of its appeal at the appellate court.

Other grounds for the application are that Buba vacated the orders of Abang based on an oral application by the respondents' counsel.

'The present application is necessary to restrain the respondents from dissipating their assets and rendering nugatory the possible outcome of the appeal at the Court of Appeal.

'This Honourable Court has a duty to stay further proceedings in the matter pending the determination of the appeal in order to avoid foisting a 'fait accompli' (a thing already accomplished) on the appellate court,' it said.

In its appeal, AMCON argued that Justice Buba misdirected himself when he heard and granted the oral application of lawyers to Bi-Courtney Group and vacated the orders of Abang.

It also argued that Justice Buba equally erred and misapplied the law when he held that the orders of Justice Abang amounted to abuse of court process.

No date has been fixed for hearing of the applications (NAN).