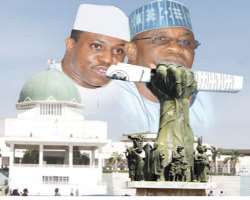 The Nigeria Senate is at it again for the wrong reason, to make politics the private preserve of the might and all mighty in Nigeria. The bone of contention is that Senate Committee on Constitutional review has given their okay in adopting the proposal to upping educational qualification for would-be election contesters.

They've agreed to make it compulsory for only those with tertiary certificate to contest and be electable into presidency, senate and governorship contests. Modesty forbids that the House of Representatives take a cue and toe this dishonourable part in consenting alongside Senate.

Their wayward and elitist campaign to make Nigeria politics another game of golf that's the pastime of higher-ups in society would spark proliferation of certificate forgery as if we've not had bellyful of churns of fake certificate that's the order of the day in our country.

Senate's watchword in this issue is not on educational fineness but flashing of the most bogus certificate even if Toronto and pseudo be much the better. The fact that our dodgy president Yar´Adua and his vice Jonathan Goodluck are of university background and yet nothing to show for their leadership till now dulls any argument for a tertiary education for top political posts in Nigeria.

If you allow me equal foolishness like our senators, I'd suggest that those who're more than fifty-five years of age should be banned from politics. True, It's not old age nor lack of university education that has dwindled our democracy all this while.

Emphasis should be placed on how much education one has had in his lifetime and not on certification. Certificate could only make you employable; it is education that gives you the real empowerment, the genuine gut feelings, the fineness that no amount of ill-gotten certificate could guarantee.

For this, and if their wrongly speculated certificate-craze made it into our constitution, I'd suggest that politicians across board should be made to write entrance examination to become politicians each time they stand for election. Manufacturing the tallest certificate to become a top politician is not enough, proving ones competence and defending your certificate should come to play now in Nigeria more than any time else.

I hereby suggest that the “ministry for political examination” be established to take up the duty of setting examination for aspiring politicians. I'd suggest the following ace men as linchpin and headship of my anticipated ministry for political examination: onetime president General Buhari, once EFCC tsar Ribadu or our torch lawyer Femi Falana. No riffraff and reject should ever find their way to politics in my proposed election cleanup.

What a contradiction that the same senate that has given go-ahead that former criminals should not be barred from politics is now disallowing innocent school certificate holders from vying for topmost political positions in Nigeria. The bulk of those ex-convicted ones are from the higher political class and hence Senate is not giving a flying hell about criminals and corruption heavies parading our upmost political places.

Politics is about service to humanity, making it elitist and certificate-loaded is turning democracy upon its own head. Politics and democracy are all about using your heart in most cases and not your head. The reason why democracy has made a fool of us for too long is that Nigerian politicians are operating from their heads instead of their hearts, which embodies duty to mankind and inspires empathy. Your heart tells you to corruptly enrich yourself from our commonwealth and gather primitively like Mrs. Turiai Yar´Adua and erstwhile president Obasanjo, personal effects that you don't need in one lifetime. It's from the heart one shows love to his or her neighbor as himself.

The superabundance of certificate as criterion to top political post in Nigeria is purely nonsense to one side. Prescribing overmuch certificate for political post is elitist as it is a head thing. True education, empathy, altruism and sympathy, which are core in servicing humanity, doesn't come from oversize certificate.

The ability to read and write, understand simple s mathematics will do to qualify anyone to the presidency in Nigeria. In First-Word countries like the one I reside, superior education is not a must to enter politics. Journeymen and handworkers could make it to topmost political places in Germany for example. Joscher Fisher, the once German external affairs minister hasn't tertiary education.

If bogus education is core for performance Bill Gates of the well-moneyed Micro Soft fame who dropped out of university will not be where he is. The once violent human right crusader Malcolm X who hadn't university education wouldn't have left his footprint in world history. The list of international achiever with no tertiary education is plenteous.

Superior education is a must have, that said and good as it is, Nigeria senate shouldn't use their privilege stations in life via dirty political underhand to outlaw lowborn and under-privilege Nigerians from seeking top political post. On no account should they attempt making a monopoly out of Nigeria politics for themselves and their highborn children. Big certificate doesn't actually mean superior education. Certificate is one thing and education is another ball game.

You might be high on certificate but low and derelict of any education. Before senate starts a new wave of certificate proliferation, they should be mindful that it takes genuine education and the ability to love your neighbor as yourself to serve mankind.

University education is just a sidekick of it. Nothing is wrong with the formerly allowed secondary school educational qualification but everything is bad with corruption, rigging of election and falsification of churned Toronto pseudo certificate that has taken over Senate and not abating anytime soon with yet another paper certificate qualification upliftment not trended towards educational knowledge.