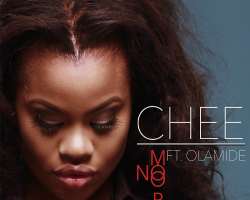 Chee is back! Songstress, Chee, is back on the music scene with this massive collaborative piece with Olamide.The Glo Ambassador, who has been working under the radar for a couple of months following the release of her Video “A Non Ebea” which ruled the airwaves a while back, has released this refreshing tune which she titles: “No More”.

Produced by Leriq, the song is a fusion of the pop, electro and dancehall genres, and features a sprinkling of “street rap” from the Street King himself, Olamide. The song shows a change in the direction of the musician's style, which she has been working on for the past couple of months. The song is dropping today, which is Chee'sbirthday, so download and enjoy!