Obuh is the new face of Delta – State PDP Chairman 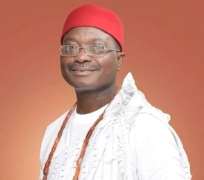 The Chairman of the Delta State Chapter of the Peoples Democratic Party, (PDP), Chief Peter Nwaoboshi has debunked insinuations that Sir Tony Obuh who is an aspirant on the platform of the PDP is not qualified to contest for the party's ticket at the primaries saying those insinuations should be discarded and disregarded as Sir Obuh is eminently qualified to contest the primaries.


Chief Nwaoboshi who was speaking when Sir Obuh paid the PDP executive a consultation visit at the party's secretariat, said Obuh is a card carrying member of the PDP and has been since 2011 saying he has however been non-partisan until he retired from the Delta State Civil Service in August 2014.


He said Sir Obuh has been in the background giving the PDP all the needed support to ensure the party moved in the right direction and has in no small way impacted on the party's performances since 2005 as he has founded several support groups that propagated the PDP's manifesto as well as its determination to take Nigeria to a higher pedestal.


Chief Nwaoboshi therefore called on those peddling rumours to desist as it will not deter the party from going ahead to hold its primaries or prepare for the general elections saying the PDP remains the only vibrant and dynamic party in Nigeria with solid structures to win elections in Nigeria in a free and fair atmosphere.


The PDP Chairman opined that the party was interested in those who can build the party and make it stronger and not those who will derail it through gossip and rumour mongering and challenged Sir Obuh not to be deterred but continue to garner support saying the party will support anyone chosen by the members of the party while stressing that no amount of intimidation will stop the party.


He warned Sir Obuh to be careful with people as politics was a different terrain where blackmailers and gossips can derail a man's vision while assuring him that he was qualified to contest the primaries.


Speaking earlier, Sir Obuh said the State needed someone to harness its potentials towards becoming great hence his decision to present himself as he had the immense experience needed to transform the State into an economic super power in Nigeria as he is well aware of the huge potentials that abound in the State especially the nitty-gritty needed to make those potentials beneficial to the people of the State.

Obuh said he believes that government can serve the interest of the people by formulating and implementing policies that everyone can be proud of, adding that he believes he has the experience to achieve all these if given the opportunity, stressing that his experience in government and governance stands him above the other aspirants.


He said he was also in tune with how the public and private sectors can work together towards enhancing the growth of the State and he was willing to articulate the potentials towards creating a virile and vibrant economy that will cater for the elderly, the women and youths, saying his policies will impact positively on all spheres in the State and the people will rejoice and celebrate.


Obuh said he does not need a waiver or exemption to contest the governorship primaries on the platform of the PDP as he has been in politics for a long time albeit in a non-partisan capacity and revealed that he was now willing to serve as the peoples servant as he hopes to create a future that Deltans unborn will be proud of.


The Director-General of the Project Obuh 2015 and Political Adviser to the Governor, Chief Fred Majemite said Sir Obuh is a marketable product who has stood out in the public service over the years and is capable of taking Delta to a higher pedestal while describing Sir Obuh as a bridge builder who can unite Deltans having impacted on the lives of the people while in the Civil Service.

Chief Majemite said Sir. Obuh will also build a stronger PDP as he is the new face of Delta State politics.