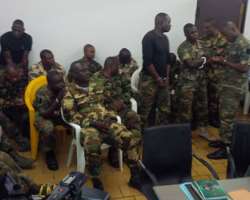 Former Senate President Ameh Ebute, on Wednesday filed an appeal against the execution of six of the 12 soldiers condemned to death by the Military Tribunal which tried and found them guilty of mutiny.

Ebute, a renowned lawyer, also filed a motion for a stay of execution of the condemned soldiers at the Appeal Court in Abuja. Ameh confirmed that he filed the appeal in accordance with Sections 183 and 184 of the Armed forces Act cap A of the Laws of the Federation, which give the condemned men up to 10 days to appeal against their conviction.

Ameh however asked the military not to take further action on the convicted soldiers until the appeal is heard and determined in accordance with the law of the land especially as the GOC who they allegedly attempted to kill not killed by the appellants.

The former Senate President however expressed concern over the condition under which the condemned men were being detained by the military authorities in Lagos, saying it was tantamount to execution.

According to Ameh, the soldiers had been detained in an isolated dark facility bereft of the basic amenities that can hardly support life, saying that it would be difficult for human beings to survive under such condition.

While calling on the military authorities to transfer the condemned men to regular detention facility the lawyer pleaded that nothing should be done to take their lives, as Nigeria was not in a jungle.

Ameh said, 'The condition under which these men are being kept amounts to execution since they are kept in a permanently dark room bereft of the basic facilities of life. - Vanguard.