Arrest T.B. Joshua for negligence-57 dead, 131 injured-Questions he must answer! 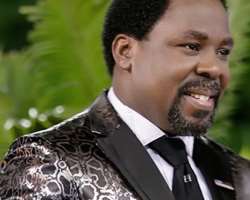 In 2011, James Ray, a self professed Guru was found guilty of negligence. Mr. Ray, who then was a motivational speaker and author, had faced a maximum of nine years in prison after he was found guilty in June in the deaths of Kirby Brown, 38, of Westtown, N.Y.; James Shore, 40, of Milwaukee; and Liz Neuman, 49, of Prior Lake, Minnesota. The case stemmed from an October 2009 ceremony at a retreat near Sedona, Ariz., where hot stones were piled into the middle of a sweltering makeshift tent. Some who took part in the ceremony, which was intended to push people to conquer their limitations, said Mr. Ray ignored signs that some of the participants were falling ill from the heat about halfway through the planned two-hour experience.

When tragedy hit the door steps of Synagogue Church of all Nations, T. B. Joshua, a guy who claims to see tomorrow apparently fell asleep at the switch. Now, the clever man is spinning the whole tragedy around, blaming the evil one for being responsible for what happened. He is using many Nigerian bloggers to do a lot of image laundry to make others look evil, while he remains a saint. . His followers are doing damage control, attacking on social medias; folks who are asking valid questions.

This message was posted by a member of his church on my wall ( Nigerian FM facebook wall)-it reads:-

“You press people are publishing derogatory or defamatory messages and statements against anointed men of God with power. You people are looking for the evil Curse of Leprosy on your bodies and businesses. Be careful!

I know one thing if that man gets upset at your write ups or posts and Curses you people with that mouth he uses to cast out demons and heal all sorts of deadly incurable sickness from all over the world, I don't think there is any one out there that would be able to deliver you people from it and I know what I am stating! I suggest you be wise and to let him be!Please note this is not ment to be a malicious statement or an insult” -Adolphus Eni

According to the Lagos State Government, T.B. Joshua, did not obtain the necessary permits before embarking on this doomed project. He violated the Law –the building was not professionally constructed. So, why has no arrest been made?

said -”upon arrival at the scene, rescue workers from the agency met resistance from church members, who said they could carry out the rescue mission themselves.

According to the agency boss, members of the church had said “that they don't need our (LASEMA) efforts. That they are equipped. That they know how to do it”.

This caused a delay of about 20 minutes as the LASEMA management had to hold a meeting with the church members, to state their intentions and plans”.

We held a meeting with them. We told them our mission and vision and what the State government represents and with that we sought their cooperation and they started cooperating with us.”

The man told Channels TV, they were delayed, some of his men were physically assaulted. They met stiff resistance for three days from Zealots who are members of T.B. Joshua's Church. The man also said construction was still going on while people were living inside the collapsed building.

The public is yet to know the identities of the dead, Joshua who ought to shut up is trying to save his face and job. We published what he wrote on his Facebook wall after the tragedy-

“A building, not the church auditorium as was reported. The few people that were there are being rescued. What you wish to others, God wishes to you. Nothing makes us love a person as much as praying for him. The more I love you, the more I will pray for you.” …He issued that statement hours after the incident.

After the whole thing blew open-a doctored footage was shown to the press. He was bold to say-“ The evil one did it- aircraft flew over the building just before it collapsed.

“After the incident, the “strange aircraft” does not return,”

In a face saving attempt to downplay the stark naked reality staring at him, Joshua brought out a white sheet of paper which had an email sent by a convert who he said was a Boko Haram member. Then he says-

“I did not bring this out before now because I did not want people with little faith to be scared and stop coming to church.

“Even my wife did not know of the existence of this mail. Only the people at the email department and myself knew of it and I told them not to disclose it to anyone.

The man who sent this email is from Kogi State, residing in Jos with his soldier parent”

“He was a Boko Haram member as you have heard them read it, who came to SCOAN to plant a bomb but could not do it because of our God and got converted and went back to Jos with the explosives.

“I am showing members for them to know the God they serve. If I had shown it in the past, faithless people may not want to come to church again.

“We have to believe what happened so that our people can learn and be educated to be on alert at all times,” Joshua said, adding:

“Boko Haram will not stop here. I have said it before. It won't stop here but our God will get back at them such that they will know it is because of what they have done in this church.

“Maybe, this one will be the end of the whole thing. I have remained silent because I have to. My life has been like that. People will lie from the beginning and later realise the truth. It is my life and I accept it. It is a good life”.

There was no independent verification of the authenticity of the footage but Joshua said he would make it available to Nigeria's security agencies.

Managing Director of Nigerian Airspace Management Agency (NAMA) Mr. Ibrahim Abdulsalam said the matter is being investigated. He said Minister of Aviation Osita Chidoka had not directed him to comment on the matter. He said details would emerge shortly.

According to a very reliable source, many lives could have been saved if T. B. Joshua's “generals' had allowed first responders to do their work. It was not until the Governor of Lagos State arrived that he ordered them to allow the professionals to do their job. The governor said-“We understand that this is an unfortunate situation but we need your men to understand that it is an emergency situation. Anyone obstructing the duties of emergency agencies will be arrested.”

When you claim to see visions and prophecies for others without seeing an impending doom about to fall upon your kingdom, it is necessary and appropriate for folks like me to ask you questions.

So my question to this man is,- when are you really going to come clean? When will you stand up and be man enough to tell your followers you are only human-bound to make mistakes? When will you tell them about the ghost writers, responsible for all your scripts, the paid bogey men who set up prophecies & fake visions that never come true? When will you tell the sick in your church to go to the hospital for medical help? . Who got saved through your 'healing & deliverance'?

A good friend of mine and former manager, late Enebili Enebuwa told me how you saved his life when he became diabetic, I implored him to visit the hospital, he never did. Years later, one of Nigeria's finest , Enebili Enebuwa, (Mr. Andrew }died. Did you tell your congregation how you failed the man's family?

Jim Iyke's mother was brought to your church for prayers after people said you have this extra-ordinary power to heal the sick, what happened to her? Did you even mention about Jim Iyke's mother's death to your followers? What really happens to men and women who gave up the ghost inside your Church? You have obviously swept every negative news from your church under the carpet all these years. You would have probably covered this tragedy up but God is above everyone else, including you.

Sir, did Jim Iyke a man you used to lure other public figures to your church get delivered after all that big news headlines his coming to your church made? Is he a better man today?. Legions of demons are chasing the man about, thanks to you. I just mentioned a few, there is overwhelming evidence that you Joshua sees nor hears nothing from God!

The government must arrest and put you (T.B. Joshua) on trial immediately. There is enough evidence to do so. You are the principal owner of the building that collapsed. Since money can not bring back the dead, I urge the families of the bereaved to drag you (Joshua) to court if the government fails. These families deserve to get some good money off T.B. Joshua for manslaughter. There must be a lawsuit for all the souls lost and those that are injured. T. B. Joshua is not above the law! The world is watching.


Emma Agu is New York based Musicologist and a social commentator.