Education: Abia and the WAEC result 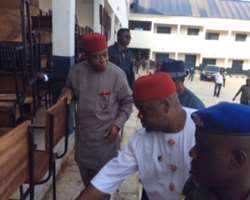 Even when some hired armchair critics who never see anything good in the present government in Abia State, since Governor Theodore Orji parted ways with his predecessor, Orji Uzor Kalu, have continued to live in fools' paradise, the fruit of labour of the state government in education sector has continued to manifest unabated and in abundance. The reality is proving Orji's predecessor and his cohorts wrong and will continue to do so because light cannot be compared with darkness. Despite the shocking and abysmal performance in this years' West Africa Examination Council (WAEC) result, Abia state, just like last year emerged the overall second best in the country with 58.52 per cent performance. Having achieved the feat for two consecutive years, it is obvious that Abia government's giant stride in education is not a fluke.

States like Lagos, Rivers, Akwa Ibom, Delta and others with many expensive and class private and public schools and enormous resources have not recorded these feats in the recent times. So where are the hired critics and the doubting Thomases who have made criticising and demonising the present government's achievements and governor ahead of 2015 polls? It is time for them and their paymaster to bury their heads in shame because the State's performance in WAEC examination in the last two years is unprecedented since it's creation. The state did not witness such sterling performance during the era of the immediate past administration when special centres took precedence over development and investment in public schools.

For those of us who are witnesses and beneficiaries of the present government's aggressive and massive investment in education sector since 2007, the state performance in WAEC examination is never a surprise. The state will do more than this in the years to come when the government interventions would have fully materialised.

It could be recalled that when the present government came into office in 2007, the education sector in the state was in shamble. Apart from low motivation on the side of the teachers due to stunted promotion, owing of salary arrears and lack of good teaching environment, the worrisome state of public schools across the state is nothing to write home about. There was divide and rule approach in the state civil service orchestrated by the immediate past government. The situation was very pathetic, appalling and daunting.

But despite all these challenges, the present government on assumption of office took the gauntlet in addressing the age-long rots and challenges that have bedeviled education sector in the state. The governor, Chief Theodore Orji, a product and beneficiary of public schools leaves no one in doubt of his government's commitment to see that education is improved in the state.

The government increased the monthly subvention of all the tertiary institutions in the state. The State Scholarship Board that had been moribund was reactivated. With the reactivation of the Scholarship Board, the regular bursary disbursements to indigent Abia students was resurrected and beneficiaries have continued to enjoy it till date. The Board also reactivated the Overseas Scholarship Scheme through which it has granted bursaries to over 40 students of Abia State origin studying in the United States of America, the United Kingdom, South Africa and Asia. Students of Abia origin currently in Nigeria's Law schools were recently paid bursary by the state government.

Not resting on his oars in providing education for the children of the state, the governor instituted a private scholarship scheme known as Ochendo Scholarship Scheme which took off with 25 undergraduates in various disciplines within the country as beneficiaries. The project which was strictly private has the respected Catholic Bishop of Umuahia, Most Rev. Lucius Iwejuru Ugorji as its Board Chairman. One of the beneficiaries of the Scheme, Mr. Solomon Odochi Chibuzo of the department of Animal and Environmental Biology Abia State University, Uturu emerged the overall best graduating student of the university in 2013 with CGPA 4.8. He was rewarded with automatic employment by the university authority. That is how the poor boy through Ochendo Scholarship Scheme became empowered.

The government also increased the fleet of buses in its Free-School-Bus Scheme for students in Secondary and primary Schools and had also repackaged the scheme to ensure effective and efficient service delivery. Teachers' salaries and allowances are being paid regularly and as at when due. The same goes with their promotions and entitlements that accompany it which hitherto were stunted. That is why it has been difficult for teachers in the state to go on strike since 2007, rather they have continued to do their work happily and wholeheartedly

The government embarked on massive rehabilitation and construction of standard classroom blocks, offices, and other facilities in schools across the state. Presently many of the rehabilitation and construction works at the schools have been completed. They include construction of classroom block at Nde Ebe primary school Abam, Arochukwu, construction of many administrative blocks at a school in Okeikpe Ukwa-west, Construction of Administrative blocks and borehole at Ogbor Central School old Umuahia. At Isikwuato High School, three classroom blocks and a toilet were constructed. The same facilities were also constructed in Community School Umuobala, also in Isikwuato council area. Also not left out were Leru Secondary/ primary schools Leru in Umunneochi council area where several classrooms were constructed. Across the state, the list of completed work is endless, massive and unprecedented in history of public schools in the state.

With the completion of works in the schools, the state government returned most of them to their original owners to manage, while the government has continued to pay their teachers salary till date. The government through the Ministry of Education ensured strict supervision and monitoring of the activities of private schools in the state which has brought the closure of some of them that were caught cutting corners.

Also not left out by the state government in its intervention in the sector are the state-owned tertiary institutions. Monthly subvention to the Abia Polytechnic, Aba, Abia State University, Uturu and others were increased astronomically by the government to make education affordable to all in the state. Towards the end of last year government released the sum of N5.4 billion to the management of the state university, ABSU to tackle infrastructure projects in the school. The government also restored peace and harmony between the University and its host community, complete liquidation of the arrears of six months salaries of staff, which gulped a whopping sum N960 million. The government had also redeemed her promise to implement the 2009 FGN/University Staff union's package in the University from January 2011 which cost the Government an additional N528 million.

Before now, the University's Surgery and Medicine programme was facing the threat of de-accreditation by the Medical and Dental Council of Nigeria. The government had rescued the university by providing all the requirements for the full accreditation of the programme. The governor approved and awarded contracts for two major projects for the school, namely Medical Complex and an Auditorium for Abia State University Teaching Hospital located in Aba. The projects have been completed and handed over to the management of the school since.

Ozuobi, a teacher, wrote in from Umuahia, Abia State.