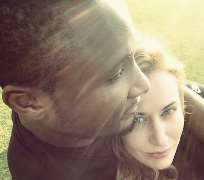 A Nigerian lady with the Instagram handle Zanabwizzy took to Mikel's IG and begged him to leave Olga alone saying she is pained and frustrated that Mikel has not been doing well lately in his career.However a Russian Chelsea fan was on hand to talk her down as well as others.

Peep a screenshot of her message after the jump: