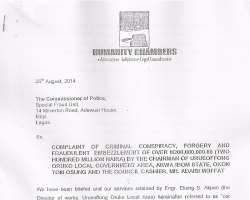 the name of a council Director of Works as cover up.

Engr Ekong Akpan, the Director of Works in the local government in a

petition signed by his lawyers, Humanity Chambers said the Chairman who is

currently under investigation by the Economic and Financial Crimes

has been harassing him (Akpan) for making damning disclosure against the

council chairman while giving evidence before the EFCC investigation team.

Integrity Group had petitioned EFCC alleging that the council chairman had

defrauded the council to the tune of N500 million.

Akpan, the Council's Director of Works said he was invited by the EFCC via

delivered to him on 16th of June, to give evidence before the

investigation panel.
Akpan disclosed in the petition that he was confronted with more than 25

different documents ranging from memos to vouchers allegedly raised and

signed by him, which led to withdrawal of more than N200 million from the

council's account.
However, upon his denial of the knowledge of the origin of the documents,

the EFCC, he said extended invitations to some employees of the Council

like Treasurer, Cashier and Director of Finance for questioning.

During interrogation, the Cashier was said to have owned up that the

dubious vouchers and memos were ordered produced by the Council Chairman

them to seek authentication.
Akpan however said, in the process of travelling to Abuja to heed the

calls of EFCC on various occasions, he has spent up to N300,000 (three

fares and other logistics.
However, the council chairman Akpan said as an act of vendetta, has

“accepting the authorship of these forged documents”.

The petitioner urged  the police special fraud to conduct a fresh

possession, has refused to take further actions on the issue.