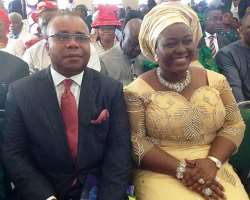 A pre-action notice sent to Obong and Mrs. Umana Okon Umana by AMCON, through her lawyers, Charles Uhegbu a Co, a copy of which is in our possession reveals that on December 17, 2007, Bank PHB/ Keystone (AMCON) granted a loan facility to Mrs. Florence Uman O. Umana and Mr. Ubong Ubiam on behalf of Kaniex Integrated Services Ltd for a period of one and a half years (18 months) for the purpose of constructing the company's permanent structure.

According to the legal firm, the applicants in a bid to get approval for the loan from the bank attached the following documents to the loan application:

The pre-action notice from the law firm to the loan applicants states that after the “bank magnanimously granted the loan in the applicants favor and the facility was duly accepted,” the applicants have since refused, neglected or rejected to liquidate the said facility when the bank called in for her money, despite several demand notice.

In the notice, the legal firm stated that the refusal of the loan applicants to defray the loan in question is allegedly, “due to your criminal conversion and diversion.”

The law firm maintained that from investigations, the bank/AMCON discovered that the loaners (obligors), fraudulently converted and diverted the said facility for the purpose of buying stock/shares of Bank PHB/keystone (AMCON), thus negating, offending or expunging the letter and spirit of the offer graciously granted the obligors herein.”

Continuing, the legal firm stated, “This singular act of criminality is obviously depicted on the bank statement which of course expressly offends every known criminal law globally.”

“Permit me to further state that in other to feign ignorance of the said fraudulent act, you completely distanced yourselves from this obligation. Furthermore, you have maintained that you are/were not aware of the existence of such transaction with our client,” the law firm noted.

“However, it is on record that vital documents such as your international passport evidenced this transaction. It is also on record that your cronies were used to execute several fraudulent transactions from the bank statement,” the pre-action notice to the Umana's maintained.

According to the law firm's letter, “Moreover, you have also stated that the facility was granted without your express consent or board approval. As a matter of fact, this is highly false and misleading as the board resolutions as well as other documents obviously evidenced full consent.”

The statement further added, 'Sadly you further admitted that you do not owe our client any form of obligation, since the facility was granted to “unknown persons”. “Much to our chagrin, you further contended that you are highly politically connected and the Economic and Financial Crimes Commission (EFCC) or the Nigerian Police cannot arrest, investigate or prosecute you.”

“It is quite pathetic and ridiculous that in our 21st century/computer age, some people will hide under the pretext of “the doctrine of alibi” to perpetrate such heinous crimes.”

Then the law firm's clincher: “TAKE NOTICE, that this letter serves as a pre-action notice of intention to commence legal action against you as well as KANIEX Integrated Services Ltd, should you fail to honor your obligation within the above mentioned transaction within 14 days from today.”

All efforts to speak with the Media Aide of Obong Umana, Iboro Otongaran were not successful, but o=Otuekong Bonny Nyong who also handles media and publicity jobs for the former SSG who spoke with our Editor on the allegation, said his principal had confirmed to him that the allegation is not only false but a blackmail to dent Obong Umana's image.

He assured our editor that Obong Umana was going to issue a press statement on the loan saga promising to get across to our editor when the press statement was ready but as at the time of filing the report he was yet to call our editor for his principal's side of the story.