God's Own State on the 23rd Step 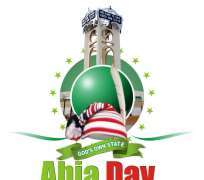 The 27th of August every year has become an annual ritual, celebrated with fanfare of multiple hues. There is no doubt that Abia will triumph. A collocation of factors, most of them propitious are pointers that could be interpreted as good omen.

If we take a look at Abia birthday mates who have trod this earth and other epic events, you will realize that they left quantum footsteps and extra large sized shoes, too big to meet matching feet. Lyndon B Johnson, the 36th president of the United States of America was born same date in 1908. Georg Wilhelm Friedrich Hegel, the 19th century German Philosopher, acclaimed worldwide for his numerous political and social theories, hit the earth on August 1770 in a place known as Stuttgart. Towering above others in service to mankind was Mother Theresa, the Yugoslavia-born Catholic nun. As captured above, she lived and died for the poor and raised charity work to the highest level. She shares the same birthday with Abia as she was born in August, 27th 1910. It is democratically instructive too that the French National Assembly issued the bill of Rights of Man and Citizen on the 27th of August in 1778.

From all the above, it is evident that Abia was born great, full of promises and like Canaan, bound to flourish with milk and honey.

Abia created in August 27, 1991 by the Ibrahim Babangida military regime was a result of hard work, diligence and synergy of the founding fathers led by Dr. Michael I. Okpara, Mr B A Wachukwu, who functioned as the deputy while Hon Dr MAO Agbara was the secretary. Other notable members are Dr. Anagha Ezeikpe, still kicking and highly articulate, Senator S M Ojukwu, J OJ Okezie, Hon S U Nwangaga and Prof. J C Ogbonnaya, former pro-chancellor of ABSU and consultant surgeon at Madonna University Elele. These men and other officers of the Abia State Movement, too numerous to mention living and dead, marched gallantly to the National Assembly in Lagos, on July 3, 1980 and made a formal presentation for the creation of Abia State. It took eleven years, after most of the activists have died for their prayers to be answered.

The first Military Administrator, Group Captain Frank Ajobena, did the pioneering work and took off with the existing structures, converting tiny education department offices of the then Ikwuano/Umuahia local Government Area and classrooms into some parts of the existent Government House. These rooms make up the rooms 1 to 20. These rooms are still in use as Government House Offices, but change is afoot with the new Government House under construction by the Ochendo administration.

A succession of military officers continued till the era of democratically elected government of Dr. Ogbonna Onu, who himself, had to go due to another military intervention. The benevolent interregnum of Gen Abdulsalam Abubarka ushered in Dr. Orji Uzo Kalu who exhausted his two terms before handing the truncheon to His Excellency, Chief Dr. Theodore Ahamefule Orji.

The founding fathers were aware of some awful experiences that emanate from political movements and struggles. Most of the time, cases abound of deprivations, neglects and slavish domination; consequently they laid a solid foundation in form of legal framework to check such ugly situations. These foolproof checks were well stated, signed, sealed and delivered. According to professor S N Nwabara, in his book, God's own State, an account of the creation of Abia State page 43, 'Abia will be a happy STATE, a model STATE in the Federation of Nigeria. It is to this end that the people of the proposed ABIA STATE have drawn, signed and sealed for themselves what we call THE CHARTER OF EQUITY. This is to reassure friends and opponents alike that everyone matter; that every community matter; that no part will be neglected; that there will be no domination of any group in the STATE by the other; that there will be even development of the STATE. This is what is reflected in the motto of the STATE: 'ONYE AGHALA NWANNEYA'.

This Charter ranks as high as other fundamental declarations like the Magna Carta and other bills of Right. Among other articles is the power shift which is a potent inflammable factor and cause for concern in other political situations. This all-important issue of power rotation among the senatorial zones was fully addressed and has been fully adhered to. As a testimony, power has shifted from Abia North Senatorial zone to Abia Central.

Dr. T.A Orji, from Abia Central Senatorial Zone has unequivocally pledged his commitment to this document as to facilitate the power shift from the central to Abia South Senatorial Zone, notably, in 2015, his terminal date. In a Unanimous decision by the PDP Abia Caucus, ratified by the stakeholders on 21th July 2014, this zone will produce the next governor.

As a people, there are some pertinent questions we have to ask ourselves.

Where are we coming from?
What have we achieved so far?
Where are we heading?
In all these years, which persons or group have served us better?

The Holy Bible states it clearly in Proverbs chapter 29 verse 2, 'when the righteous are on the throne the people rejoice. 'None can deny the fact that Abians have had it so good with His Excellency Dr. T.A. Orji in all sectors of human development. In infrastructural assessment, Abia leads. If previous administrations have embarked on such developmental strides like Ochendo has done, there will be no bad road in Abia. His Excellency has transformed bush paths to roads, bushes to houses and local communities to townships. Communities do not have to travel long distances with over 710 Primary Health Care centres, 250 out of these built by him in all the nooks and crannies to sooth frayed nerves as, according to him, only the healthy can enjoy dividends of democracy.

Diagnostic centres equipped with state-of-the-art machines like dialysis machines are in place not forgetting the ultra modern specialist hospital that is the toast of our brothers from neighboring states like Akwa Ibom, Cross Rivers State, Ebonyi and Rivers State. Basic Education is free with free busing in Umuahia and Aba. It is instructive that all the while, T.A has not done anything else but serve people in multiple capacities. He has a trail of Legacy Projects as if to answer the question: what will you be remembered for? In answer, there are the new secretariat, new Government House and the 9000 capacity International Conference Centre which had denied Abia the hosting rights of international conferences. Others are the updated Abia State University Teaching Hospital, the judiciary complexes in Umuahia and Aba, the 48-room Broadcasting Corporation of Abia house, first of its kind in Nigeria, acknowledged by no other than Yemi Bamgbose, current RATTAWU Chieftain. The new industrial market at Azueke and the Ubani Modern Market are still making waves in the commercial world. What with the twin-tower secretariat and the E-library with an idea hub. The Governor as a change agent has laid foundations for new airport and seaport, opening new commercial frontiers. Construction of roads and other utility projects are continuous processes too numerous to be listed.

The big question is, 'why have previous administrations forgotten these definitive projects?' For T. A. Orji, the icing on his cake is reassembling and genuinely reconciling all Abians in one big umbrella of PDP as a house divided cannot stand. As a testimony, all Abia leaders led him to an unprecedented victory in April 2011, with Chief Onyema Ugochuwu, his hitherto political adversary playing major supportive roles. Ochendo's honesty in keeping his promises has disarmed his former foes in the old political formation, forcing them to place their cards on the table. It is not a surprise seeing Chief Ojo Maduekwe, Vin Ogbulafo, Elder Emma Adelu, Enyi Abaribe, Chime Asonye, Senator Nkechi Nworgu and others previously tagged Talibans or Abuja politicians, dining in one ornate table. In the same vein, Abia leaders of thought hitherto cajoled, harassed and negatively profiled for their upright positions on policy issues, for these and more scampered to safety but are now back to reckoning, snuggled on the Ochendo comfort fur coats.

Crime rose to high heavens in form of horrible kidnappings and gangster-like armed robberies which forced banks on unscheduled closures, have been brought to the barest minimum. Today, Abia is the investment destination with groups like the Honeywell group, Nigerian Breweries, Guinness Nigeria, Spar, Kia Motors, TradeMore, African Independent Television, Aso Investments and International Conglomerates like Shoprite, Broadbased Communication- a fibre-optics behemoth, Embassies of Thailand, America and many others are posturing for space. Agriculture the mainstay of former Eastern Nigeria is reengineered, made attractive for our youths to migrate from being ravenous consumers to the enviable place of producers. These are just to say a few. These have multiplier effects on Abia sons and daughters in far and near as they win educational laurels.

What more can we expect other than peace, growth and tranquility?

Having come this far as a State and a sociopolitical aggregation against all odds, may we say these prayers together:

Oh lord, when the winds blow and we wobble, steady us.

If as mortals we fall, raise us,
If it gets aggressive like the kidnappings we experienced,

Give us the courage to fight and show us the escape route.

Strengthen our leaders to give us more intellectual

growth and infrastructural development. Amen!
Abians, trudge along the dreams of our founding fathers.