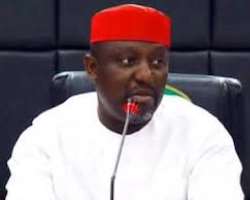 Governor Rochas Okorocha of Imo State and his Chief of Staff, Sir Jude Ejiogu have been commended on their leadership example applauding them for their efforts in reducing sufferings of Imo women during era of previous administrations in the state.

The women made this commendation while marking the 2014 August Meeting at the Ezeogba Hall Emekuku and Community Primary School, Umuorisha Emii respectively.

In their separate speeches, President Generals of Aladinma Ndom Ezeogba Emekuku, Lolo Angela Ohiri and Mrs. Loretta Madu who spoke on behalf of Ezimba/Mbaoma Emii Women Association said that what the rescue mission government of Governor Rochas Okorocha achieved since assumption of office in three years was far better than what past administrations in the state realized in twelve years urging him and his Chief of Staff to continue to sustain the tempo.

According to Ezeogba women, Governor Okorocha and his Chief of Staff, Sir Jude Ejiogu have shown the world how leadership should look like appealing to politicians jostling for different positions in the state to emulate their track records.

Also, the Ezimba/Mbaoma Emii women expressed happiness for government's prompt response to their call for the rebuilding of their dilapidated bridge and assured of their unalloyed support to the rescue mission team in the state.

Addressing the women respectively, the Chief of Staff, Sir Jude Ejiogu urged them to use the ongoing August Meeting to engender peace in their surroundings assuring them that government would not leave any stone unturned in ensuring the delivery of dividends of democracy to all Imolites.

Sir Ejiogu while reminding the women of the numerous developments in the state further called on them to continue to remain role models to the younger ones and as well, represent good mothers of Imo extraction which he said would be emulated by women from other states of the federation.