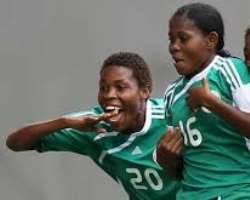 A first half brace from Asisat Oshoala and Sunday Uchechi were all Peter Dedevbo's ladies needed to breeze past their Oceania opponent that got their consolation through Emma Rolston at the Moncton Stadium.

Oshoala 's 31st second opener gave the Falconets the lead after finishing off a pass from Ugo Njoku who raced through the left side of the New Zealanders before his well tailored cross.

Nigeria got the second goal of the encounter through Oshoala in the 11th minute. Chiwendu Ihezuo sent a good cross into space and Oshoala raced through four Kiwi defenders to finish up by putting the ball through Lily Alfeld's legs.

The African side had the game under their control but could not get more goals due to poor finishing as their opponents who are making their first appearance in the last eight of the competition laboured hard to match the strength and speed of the Nigerians.

Six minutes from time substitute Sunday put the Falconets 3-0 up after blasting home from six yards off a well taken corner-kick.

Rolston salvaged some pride for the Kiwis as she beat her defender to near post and redirected Jasmine Pereira's cross past goalkeeper Chichi to make it 3-1.

With less than a minute to the end of the game, Dedevbo's ladies restored their three-goal lead when Sunday completed her brace in six minutes. She dribbled down the left, beat her marker and calmly put the ball past Anfeld.

Nigeria will now face Korea DPR in the semi-final billed to for Wednesday August 20, 2014 at the Moncton Stadium in Canada.