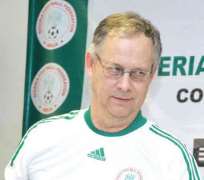 By Semiu Osho
March 26, 2010 01:13AM
New Super Eagles coach, Lars Lagerback will return to the country today from South Africa to watch the Home Eagles file out against the Mena of Niger in Sunday's African Nations Championship qualifier. The match will be held at the Sani Abacha Stadium on Sunday.

The team, led by Daniel Amokachi, will be hoping to overturn a 2-0 defeat they had in the first leg in Niamey by scoring at least three goals to eliminate their West African opponents.

Lagerback left for South Africa on Tuesday to inspect the Eagles camp at the Hampshire Hotel in Durban, ahead of the commencement of the Mundial and he is expected in Abuja today. The Swede tactician will use the opportunity to assess some of the domestic league players who would be capable of earning a call up to the national camp for the build-up to South Africa.

Nigerian soccer fans are anxious for the first list to be released by the former Sweden national team handler, who has been monitoring the performance of his players across Europe following his appointment last month. He was in the stands when the Eagles team B, largely dominated by players from the Nigeria Premier League, defeated Congo DR in an international friendly.

Lagerback's focus
One of the players Lagerback is hoping to give a second chance of assessment is Bayelsa United's defender, Chibuzor Okonkwo who represented Nigeria in the U-23 team that won the silver medal at the 2008 Olympic Football Tournament in Beijing. He can play both as a defender and a midfielder and his versatility and high work rate could earn him a call up for the pre-World Cup programme under the new boss.

Lagerback is also looking at defensive options after identifying the backline as the major challenge in the national team and the likes of Ike ThankGod and Mutiu Adegoke would be hoping to get a chance while Ahmed Musa, the league's top scorer with 14 goals as well as 12-goal star, Osas Idehen will hope to defeat Niger to impress Lagerback. Musa, who plays for the Northern outfit, Kano Pillars is hoping to make his debut in the national colours after getting the call-up from Amokachi following the first leg defeat.

Also in the list of the new players invited after the first leg is John Owoeri, who is remembered for his role in the Flying Eagles squad that won the silver medal at the 2005 World Youth Championship in Holland.