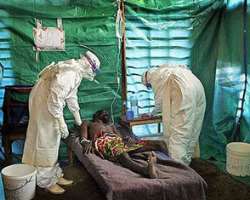 According to the United States Centers for disease control and prevention (C.D.C), Ebola hemorrhagic fever (Ebola HF) is one of numerous viral hemorrhagic fevers. It is a severe, often fatal disease in human and non human primates (such as monkeys, gorillas, and chimpanzees). The concept of labelling and stigma was derived from the interactionist sociological perspective and focus on the symbolic meanings of health and illness. The rationale for the composition of this article is to enlighten the vast majority most especially Nigerians about the social implication of the recent menace which is Ebola Pestilence.

Ebola hemorrhagic fever has been pathologically studied by several health services in Nigeria and also by international organizations. These people were said to have successfully sensitized the vast majority about the Ebola Virus Disease identification and its prevention. According to the World Health Organization (W.H.O), ebola was introduced into the human population through close contact with the blood, secretions, organs or other bodily fluids of infected person or animal. It was also recorded that health workers have frequently been infected while treating patients with suspected or confirmed EVD. This has occurred through close contact with patients when infection control precautions were not strictly practiced.

The medical sociologists seek to study the social and psychological complications related to different kind of diseases. This article seeks to utilize the Goffman's concept of stigma and Armstrong concept of labelling in understanding and explaining the social issues related to Ebola Virus Disease (EVD). From the understanding of these two theories, the state of being sick is regarded as being deviant; meaning that the intensity of illness of a particular individual withdraws that individual gradually from the society back to isolation just as being done to a criminal-deviant that is imprisoned. I regarded this assertion as being true as I heard people who are suspected carrying this disease are being quarantined.

There are two major types of deviance, Primary deviance and secondary deviance. The primary deviance represents the illness experience. The process of secondary deviance is constituted through the act of diagnosis wherein doctors engage in process of classification through which people are either labelled ill (deviant from being medically sound) or healthy. Labelling as a means of creating diseases must be distinguished from the cause of diseases. So, whether the biological state of an individual is a 'disease' or not is established by the doctor when the diagnosis or label is given to the patient.

Recently, people seem to misconceive the nature of ebola virus disease, different people gave different explanations as to how to prevent this disease. This news have successfully disseminated all over the social networks, the clerics and local chiefs were also said to have sensitized their followers in concomitance to this disease. The saddening thing about this issue is that these people overestimated this disease by giving several false impressions about the symptoms and its prevention. Some said the disease is airborne and can be contacted by anybody just as flu. Some said people should avoid direct contact to anybody they see most especially strangers. Some also said Ebola can be treated through bathing with salt and hot water solution.

The rate at which people have misconceived Ebola illness may cause high mortality rate even much more than the biological disease itself. This is because majority of people out there have been misinformed about the symptom and prevention of the disease. A person who just have malaria may likely think he or she has contacted Ebola, so as a result of the stigma and label attached to this illness, it may probably cause devastation for this person and more likely this person may die of shock. According to the Federal Ministry of Health, Ebola virus is not airborne and can never be contracted unless someone has direct contact with an Ebola carrier who is acutely ill; through the patient body fluid such as sweats, vomits, faeces, blood. It was also said that Ebola can be prevented through proper sanitation.

What really instigated the composition of this article was when a news was disseminated all over the social network saying we should all bath with hot water and salt solution in order to avoid getting contracted with Ebola. This got me so infuriated that how could something like that disinfect or protect us against a deadly virus like Ebola. Majority of Nigerians who are naive enough to embrace this information went ahead to use this hot water and salt solution and also persuaded their loved ones to do the same. It was reported that twenty (20) people got sick and three (3) died that same day as a result of this salt water bath. According to the Federal Ministry of Health, Ebola virus is not airborne and can never be contracted unless someone has direct contact with an Ebola carrier who is acutely ill; through the patient body fluid such as sweats, vomits, faeces, blood. It was also said that Ebola can be prevented through proper sanitation.

Conclusively, i will like end this article by reminding us of one quote which says "ignorance kills faster than bullet". I hereby shape this quote to suit my own averment by saying "ignorance kills faster than Ebola Virus Disease". I encourage the general public to try as much as possible to properly enlighten those people who have already been misinformed about EVD. Also people should avoid stigmatising and labelling people anyhow that they are infected when they are not health personnel. I also implore people to urgently seek for medical assistance whenever they feel unwell. Finally, people should free them self from being terrified about EVD as it may cause psychological and social disorder.