Under 20 Women's World Cup: Falconets to play Mexico by 12 midnight 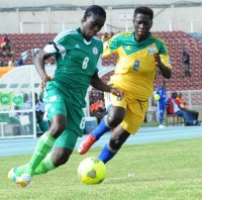 Under 20 Women’s World Cup: Falconets to play Mexico by 12 midnight
Listen to article

The Nigerian under-20 female team,the Falconets will this night get their World Cup campaign underway with a game against Mexico.

Nigeria's Falconets have excelled in their last two appearances at the age grade competition,making the semifinals in Germany and Japan in 2010 and 2012 respectively.

The seventh FIFA under 20 Women's World Cup kicked off yesterday in Canada,with the host country losing 1-0 in their first game against Ghana.

Nigeria will be aiming to make it out of their group that has England,South Korea and Mexico.

The crop of the Nigerian team in Canada,comprises of players who graduated from the under 17 team that played at the under 17 World Cup two years ago in Azerbaijan.

Chinwedu Ihezuo will be leading the lines for Nigeria in attack,although she will be hoping to put past her the bad campaign she had this year at the under 17 World Cup in Costa Rica.

Bottom of Form
The Nigeria international, who played in all four of his country's World Cup games, played 14 times for the Championship side last term and will spend the new season with the club.