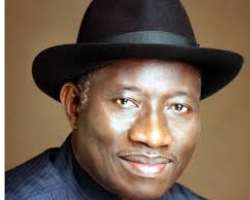 Goodluck Jonathan has challenged officers and men of the Nigeria Immigration Service (NIS), especially those at the borders to improve on their services to visitors and travellers at the airports, as they represent the first image of the country.

The president said that the conduct f these officials was very critical to the image of the country since they are the first contacts, adding that anything untoward leaves a permanent  impression in the minds of foreigners.

He said this at the lunch of the new 64-page e-passport at the Council Chambers of the Presidential Villa, which held shortly before the weekly Federal Executive Council meeting.

The document, according to the Minister of Interior, Comrade Abba Moro, was a  demand-driven initiative geared at enhancing the integrity of the country's  travel papers as well as the  image of the Nigerian traveller anywhere in the world.

The minister explained that idea was based on some recommendations arising from the operational experiences of the Nigeria Immigration Service, prompting the Ministry of Interior  to initiate reforms regarding the e-Passport, ultimately birthing the new  64-page document.

President Goodluck Jonathan and his cabinet members had converged for the weekly council meeting, but they had to listen to the Minister of Interior, Abba Moro, and the Immigration officials on the cost implication and what the new 64 page passport is out to do.

He explained that the new 64-page e-passport is specially designed for frequent travellers as well as businessmen and has better conformity with international best practices.

While he acknowledged the idea as being novel, the President noted that uppermost in his mind was how to make Nigerians abroad get their passports with ease, and making the Immigration function effectively as they encounter visitors that come into the country.

“One thing one must know today is that it is not the issue of 64-page passport that is key to Nigerians but the security. If our passport could be easily faked by criminals, then we will have problems. One thing again is how Nigerians are able to get passports easily especially those living outside this country”, he said.

The President noted that if the immigration officers conduct themselves poorly, it reflects on the country, as their conduct at the airports are key and not just the passports.

“What affects every traveler is how efficient and committed our immigration officers work at our airports, visitors that come into the country have different impressions about our immigration officers, so they must improve. They are the image of this country, how they handle visitors matters so much, if they conduct themselves poorly, it reflects on all of us, so their conduct at the airports are key besides the passport”, he said.

The President also had a word for Nigerians and how they portray the country outside the shores. He urged Nigerians to paint respectful pictures of their country so that others would see it in the same light.

The President then proceeded to be the first citizen to get the e-passport followed by the Vice President, Namadi Sambo, as they got captured by the Immigration officials.

The e-passport takes off from August 1 and the President expressed optimism that collectively Nigerians can help to create a brighter image for the country, and save travellers the embarrassment they face while travelling abroad.