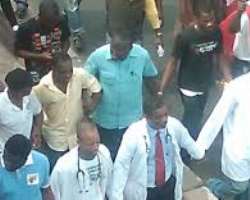 The Medical and Dental Consultants Association of Nigeria (MDCAN) yesterday raised the alarm over the purpoted plan by the presidency to clampdown on the Nigerian Medical Association (NMA), and privatise all hospitals owned by the federal government.

Doctors in government hospitals under the aegis of the NMA have been on a nationwide strike for the past one month over alleged breach of agreement reached by both parties.

The association said information reaching its secretariat revealed that if the proposal sails through, soldiers would be drafted to secure all the medical institutions, while para-military medical professionals would be deployed to perform the role of doctors.

The President of MDCAN, Dr. Steve Oluwole, in a statement in Abuja wondered whether the replacements would be better alternatives to roles performed by doctors.

He said: “In the event that the federal government toes this course of action, the military will be deployed to guard the medical institutions with military and para-military medical professionals rendering services in the mean time.

“All public health institutions will be privatised. Then, the 'no work no pay' principle will be enforced; doctors who are interested will be protected to resume duties while new ones will be employed to take their place.”

MDCAN also accused the federal government of attempts to deploy the military against the NMA and MDCAN members.

According to the association,  government plans is to compel striking doctors to retire and replace them with medically trained military officers in the army, navy, air force,  police and other paramilitary organisations.

“The attention of the MDCAN is drawn to the purported plans by the federal government to take drastic steps to end the current NMA strike. Unnamed government officials have leaked to the media that the government is considering the proscription of the NMA.”

Oluwole maintained that  “in the event that the federal government toes this course of action, soldiers would be deployed to guard the medical institutions with military and para-military medical professionals rendering services in the mean time.”

He explained that other steps the government intends to take is to browbeat the NMA and other medical doctors to submission, adding that “all public health institutions will be privatised. Then the 'no work no pay' principle will be enforced, doctors who are interested will be protected to resume duties while new ones will be employed to take their place.”

The association also cited comments credited to the Minister of Health, Prof. Onyebuchi Chukwu, in a national daily as evidence of the hidden plan to militarise the current crisis between the doctors and the government.

Oluwole in the statement noted that the “interview of the Minister of Health that was published on Friday, July 25, indicated the position of the Ministry of Health regarding the current crisis.  The position of the Ministry of Health that “we do not want to take drastic steps…”, and “… there are things government can do to have its way by force” , “ … declare positions of those on strike vacant, and replace them with unemployed and retired doctors …” give credibility to rumours  and threats of proscription.”

MDCAN expressed its worries, stating that  “propositions  of agents of government  should deeply worry anyone fairly familiar with the organisation of multi-tier health services for a country.   Before the NMA declared the strike, the MDCAN implored government to look professionally, but not politically at all the issues. Unfortunately there is little evidence that  such had been done.

“Are there no laws that establish the tertiary health institutions? Will privatisation of teaching hospitals fulfill the objectives for which they were established? Private hospitals are for profit rather than for training and research. Will they serve the primary functions as defined in the Acts that established the hospitals?” they asked.

“Will the Ministry of Health find suitable replacement for all specialities in teaching hospitals, from unemployed doctors and retired doctors? Will the Ministry of Health reconstitute the entire health system even if it is  intended that foreign doctors will be imported? The assumption that MDCAN members, who are currently restrained by court order will capitulate is erroneous.”