How soldiers killed my three sons, 32 followers, by El-Zakzaky 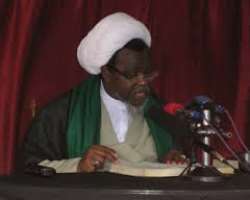 How soldiers killed my three sons, 32 followers, by El-Zakzaky
Listen to article

The three sons of the popular Zaria Islamic preacher, Sheik Ibrahim El-Zakzaky, who were shot to death by soldiers in Zaria, Kaduna State on Friday were undergraduates studying abroad, their father said yesterday.

A fourth son was shot in the leg and is currently receiving treatment in a hospital.

Thirty-two other persons, all of them followers of the Shiite leader, were also killed during the sect's annual street procession in the city.

Another three followers were allegedly shot dead yesterday by soldiers as they were passing by in front of Hussainiya, headquarters of the movement.

The Presidency is distancing itself from the conduct of the brains behind the shooting incident while the Army claimed its men acted in self  defence.

But it also said it was investigating the matter.
El-Zakzaky told reporters that 16 bodies of the victims were in the custody of the soldiers and the remaining nine at the Ahmadu Bello University Teaching Hospital mortuary.

The fourth son, Ali was shot in the leg but is alive.

He said Mahmud was shot in the abdomen and started bleeding.

“We tried to rush him to the hospital but the soldiers blocked everywhere along the way. He bled to death,” he said.

He alleged that his two other sons and many of the followers were simply arrested by the soldiers and thereafter killed in cold blood.

He said: “When we demanded for the release of our people, the Army refused. They said they would take them to Ahmadu Bello University Teaching Hospital (ABUTH) for medication not knowing that the two were killed.

He said the Police were assisting in locating arrested members of his sect at Basawa Barracks.

Zaria was relatively calm yesterday after the tension that engulfed the city in the aftermath of the killings.

El-Zakzaky's followers were on their annual procession when soldiers reportedly opened fire on them.

Friday's procession was also in solidarity with Palestinians following massive attack from Israel.

The Presidency is said to be distancing itself from the conduct of the soldiers who opened fire on the protesters.

Aso Rock, according to sources, is utterly embarrassed by the development and has ordered a probe by the security agencies into the incident during which supporters of the man considered as an influential voice against Boko Haram were killed.

The investigation is to identify the soldiers who pulled the trigger at the peaceful procession and the allegation.

President of the Civil Rights Congress of Nigeria, Comrade Shehu Sani yesterday said President Goodluck Jonathan must take charge of the security situation in the country.

The Nation gathered yesterday that the Presidency saw the Zaria procession of El-Zakzaky followers as peaceful.

It holds the fiery Islamic preacher in high esteem in view of his stance against the activities and pronouncements of Boko Haram.

“The Presidency has asked security agencies to investigate how 12 members of the sect were killed because El-Zakzaky's group has openly preached against insurgency,” a highly placed source said yesterday.

The source described the Quds Day celebration by El-Zakzaky as an annual event known to military, security agencies and the police over the years and should therefore not have resulted in any blood bath.

The source added:”Preliminary report also showed that in the thick of the disruption of the procession and attendant stampede, some followers of the cleric apprehended some soldiers and marched them to El-Zakzaky.

“Instead of being violent, El-Zakzaky, who was oblivious of the killing of some members of the sect, challenged his supporters on why they had to arrest soldiers who are law enforcers. He ordered the immediate release of the soldiers.

“Although some of the affected soldiers alleged that they acted in self-defence following sporadic shootings from the procession, the Presidency and the Defence Headquarters did not buy into the excuse.

“The Presidency has demanded an in-depth probe by security agencies in order to fish out the culprits.”

A security source said no one in the North has backed government's counter-insurgency plan against Boko Haram more than  El-Zakzaky.

“This incident should not have happened to him,” the source said.

Sani said the President should call the military and security agencies to order with a view to stopping the recurring killing of innocent citizens.

In a statement, he said it was the same type of impunity by security agencies that led to Boko Haram insurgency since 2009.

He said: “We have received the tragic story of the gruesome and cold blooded killing of the members of the Sheikh El-Zakzaky led Islamic movement in Zaria by armed soldiers. We have learnt that members of the movement were fired at while on their yearly peaceful procession, in solidarity with the people of Palestine.”

“The unprovoked attack and killing of the members of the Islamic movement by the soldiers stand unreservedly condemned. The killings are cruel, inhuman, barbaric and a dangerous act with wider security implications for the peace and stability of our country.

“It is most unfortunate and sad that our security forces have not learnt their lessons on the grievous implications of cold blood killings of religious leaders or their faithful.

“While the nation is still battling with the insurgency in the Northeast, which was triggered by the extra judicial killing of Mohammed Yusuf in 2009, a new front is deliberately and mischievously ignited by Nigerian soldiers.”

He said the dastardly killings confirmed that security forces had been part of the insurgency problem in the North.

He added:”The tragic incidence in Zaria is a clear testimony that our security forces are part of the problem. The unprovoked attack and killing of the members of the movement is a reprehensible and abominable act capable of triggering a wider bloodletting and endless conflict.

“The impunity and brigandage by our security forces undermines the peace and stability of our country and by extension the authority and credibility of the Government.”

Sani said the military and security agencies must be directed to operate within the ambit of the laws.

“President Goodluck Jonathan must take charge and responsibility of the situation on the ground. The buck stops on his table. A systematic policy and strategy of gross rights violations by security forces in the guise or excuse of fighting terrorism is unacceptable. Shooting peaceful protesters is tantamount to encouraging armed rebellion.”

The Nigerian Army said it has launched an investigation into the matter.

The Director of Army Public Relations, Brig-Gen. Olajide Laleye, told the News Agency of Nigeria (NAN) by telephone that the investigation would establish what happened.

“However, what is already clear is that Nigerian Army troops did not initiate firing and only acted in self-defence after being fired upon,” Laleye said.