Rihanna to Karrueche Tran: Get outta here with that bulls–t! 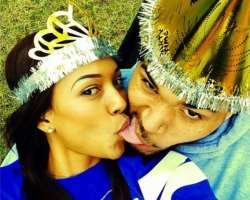 Rihanna to Karrueche Tran: Get outta here with that bulls–t!
Listen to article

Rihanna is reportedly not impressed with Karrueche Tran and her recent BET interview in which she opened up about her relationship with Chris Brown.

Karrueche dropped the star's name, and plenty of interesting pieces of gossip, on Just Keke , lamenting how she was battling Rihanna for Chris .

While Brown feels bad after hearing her talk like that, RihRih is less moved. She wants Chris' model ex to “be happy” in life … but “leave her alone.”

“She's heard about it, seen it, doesn't care and thinks the poor girl is wasting her time,” a source says of Rihanna's reaction to Tran's BET appearance.

“Like does she think Ri actually wants to sit down talk to her about some bulls–t that caused her a lot of pain? Get outta here with all that.”

“Like girl, You got him now, you love him, keep him, you won the prize girl. Congratulations now be happy and leave Rihanna alone.”

Ouch. But does this alleged Rihanna source have a point?

It's not like Karrueche flat out dissed her or anything, but she did complain that “my boyfriend is a celebrity whose ex-girlfriend is an even bigger [celebrity].”

Two quick things before we turn it over to your comments:

No one's forcing you to “get on Twitter,” Karrueche

Aren't you and Chris back together? Just enjoy!