'We deserve a visit to Chibok by President Jonathan’ Says Source 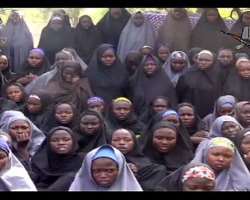 Relatives of some of the schoolgirls seized in a mass kidnapping by Boko Haram demanded Wednesday that Nigeria's president meet everyone affected, describing a hastily-arranged plan for a visit with a select few as offensive.

More than three months after the Islamist rebels seized 276 girls from a secondary school in the northeastern town of Chibok, President Goodluck Jonathan has not met the parents of the hostages or with any of the 57 girls who have escaped.

Visiting Nigeria this week to campaign for the girls' release, Pakistani education activist Malala Yousafzai, who survived a 2012 assassination attempt by the Taliban, urged Jonathan to hold face-to-face talks with those touched by the abductions.

A meeting scheduled for Tuesday was called off at the last minute, with the presidency saying the families had been manipulated by activists who are exploiting the hostage crisis to damage Jonathan politically.

But Chibok community leaders told AFP that if Jonathan truly wants make amends for his disappointing response to the abductions, he should visit the town, or, at the very least, bring all the victims to Nigeria's capital.

- 'We deserve a visit' -
'It is embarrassing that the president had to wait for Malala to come all the way to Nigeria to convince him to meet with us three months after the attack,' said Dauda Iliya, a member of the Chibok panel of elders.

'We deserve a visit by the president,' he added, saying that if Jonathan cannot go to the remote northeastern town for security reasons, he can bring 'all the 219 mothers to meet with him. This meeting should not be selective.'

Jonathan had scheduled a visit to Chibok in May but called it off at the last minute, without providing an explanation.

'For more than three months all we are praying for is for Goodluck to come and see what happened to us and see us crying,' said Ayuba Chibok, whose nieces are among the hostages.

'If our governor (Kashim Shettima of Borno State) was able to come and go back safely, why can't the president, with all his helicopters,' he added.

Jonathan on Monday asked to meet a small delegation of parents and escapees who were selected by Chibok leaders to travel to Abuja to greet Malala.

Chibok residents said the group would have faced significant backlash at home had they met the president.

'It would have been a big insult to those of us who were not present,' said a father of a girl who was kidnapped, requesting anonymity.

Jonathan spokesman Doyin Okupe charged that the group had been co-opted by the Bring Back Our Girls campaign, which includes some of the president's political opponents.

Okupe told journalists the presidency had formally asked victims to meet Jonathan next week, but the venue and number invited was not immediately clear. AFP