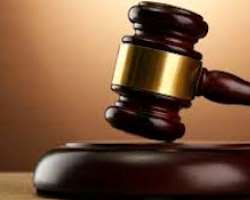 Justice Lateef Lawal-Akapo of the Ikeja High Court Tueday refused to vacate an earlier bench warrant issued for the arrest of Mr. Bube Okorodudu, the Chairman of Cross Country Limited who is standing trial over an alleged N82.8m theft.

The court had issued a bench warrant against Okorodudu over his alleged refusal to show up before the court to take his plea over an alleged N82.8 million theft charge made against him by the Economic and Financial Crimes Commission, EFCC.

Justice Lawal-Akapo held that the medical report dated 24 June, 2014 and signed by Dr A.O. Salako on behalf of the Lagos State University Teaching Hospital (LASUTH) is of no probative and evidential value.

The court also declared that the attitude of the Cross Country MD amounted to disrespect of the court.

According to the judge, “the absence of the first accused has stalled today's proceedings. The order of arrest of Okorodudu still stands.”

Prior to the court's ruling, lawyer to the Cross Country MD, Chief Robert Clarke (SAN) had informed the judge that the absence of the 1st defendant was because there is a medical report dated 24 June, 2014 before the court indicating the medical status of Okorodudu.

The SAN stated further that “having had the opportunity of listening to the court ruling and studied same, we filed an affidavit indicating that there is a pending appeal at Lagos division of the Court of Appeal. The EFCC refused to appear before the Court of Appeal because they refused to accept service to that effect.

“The Court of Appeal has taken over proceedings on this matter, but the matter could not go on yesterday (Monday) due to the absence of the prosecution. “

The senior lawyer then prayed the court to stay further proceeding pending the hearing and determination of the appeal before the upper court.

Chief Clarke while also pointing out that the Appeal Court did not order that status quo be maintained, prayed the court to adjourn the matter indefinitely until the appellate court  decides one way or the other.

But in opposition to the argument posed by the defence lawyer, the EFCC through its counsel, Jackson Emmanuel, insisted that the said medical report did not disclose in any form, that the 1st defendant cannot show up in court for the purposes of standing trial.

The EFCC lawyer also charged the court to direct Okorodudu to appear before the court for arraignment while also rejecting the medical report.

According to Emmanuel, “We visited LAUTH to verify the status of that medical report and it was confirmed by the Director of Accounts of LASUTH, Mrs O.A. Akinlawon that the said report did not emanate from the teaching hospital and that the said Dr A.O. Salako who signed the report is not on the nominal roll of the teaching hospital. The medical report is not authentic.”

Okorodudu had prayed the Lagos division of the Court of Appeal to stay further proceedings in an action instituted against him by the EFCC over allegation of theft to the tune of N82.8 million.

Specifically at Monday's hearing on the matter, lawyer to the transport merchant, Clarke told the appellate court that his client had already challenged the jurisdiction of the Lagos High Court sitting in Ikeja to entertain the suit.

The senior lawyer equally stated that the trial judge, Justice Lawal-Akapo had earlier ordered a bench warrant against him (Okorodudu) over his failure to appear before the court to take his plea.

Clarke further informed the appellate court that the matter would be coming up today (Tuesday) before the Ikeja High Court, just as he prayed the Court of Appeal to issue an order for the maintainance of status quo pending the hearing and determination of the appeal.

Consequently, the Court of Appeal, presided over by Justice Samuel Oseji instructed Okorodudu to put the EFCC on notice before the substantive appeal could be heard.

The appellate court also ordered lawyer to the transport magnate to inform Justice Lawal-Akapo that the appeal is already before the Appellate court.

Justice Oseji thereafter adjourned hearing of the appeal till 24 September, 2014.

Specifically, the judge directed the Nigerian Police to effect the arrest and produce the transport guru before the court on 8 July, 2014 for arraignment.

The transporter and his two companies – Cross Country Limited and Car Link Limited – were charged to court by the EFCC to answer to an eight-count charge of conspiracy, stealing, forgery and altering.

EFCC had alleged that Okorodudu alongside others stole the money through what it termed the fraudulent sale of 17 units of Volkswagen Transporter buses belonging to AG Moeller Limited and  Mr Adeloye Olukemi.