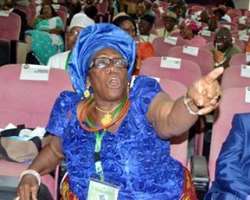 Derivation may be increased to between 21% and 25%

Chuks Okocha and Onyebuchi Ezigbo
The National Conference yesterday began debates on a stormy note with some northern delegates still complaining bitterly over the adoption of recommendation for the creation of 18 new states in the country.

Almost every delegate from the North-west and North-east who rose to contribute to the amendment of minutes of Thursday's deliberation expressed reservations over the conclusions reached through voice votes, saying the leadership needed to revisit some of the decisions, especially on the issue of state creation.

Based on the adoption of the amendment to the reports of the Committee on Political Restructuring, particularly the provision for state creation, most the northern delegates were dissatisfied and took steps to register their protest to the conference leadership at the close of sitting last Thursday.

While raising his concern, delegate Hamisu Abubakar from the North-west, queried the rationale for distributing the recommended 18 states which he said came through a voice vote and not on 70 per cent consensus vote.

He said the process of coming to a decision was as important as the decision itself, adding that he would want some of the decisions revisited.

Another delegate representing the labour movement, Mr. Isah Aremu, said under the leadership of the chairman, the conference had witnessed a lot of progress and good debate since the conference started but that last week's handling of the deliberations had give him cause for concern.

He explained that for instance, most of the states listed during the passage of the report on Political Restructuring were not viable and should not have been recommended in the first place.

Yet another nothern delegate and former Minister of Education, Prof. Rukayatu Rufai, insisted that the North-west was short-changed, wondering how four states can be created from the North-central zone while only two were granted to the North-west.

A Katsina delegate, Talatu Nasir, in her own contribution said though she was 100 per cent in support of state creation, she was of the view that the conference had failed to take proper consideration of various requests by delegates.

She requested the conference to expand the list of states to include more requests, especially a state for the North-west. Alternatively, she said the issue of state creation should be deleted from the conference report for another opportunity to take a look at the issue.

Robert Audu, representing retired civil servants, said he had submitted a proposal for a 50-state structure, which was received and acknowledged. He regretted that the list of states approved by the conference came from the controversial conference report which was earlier rejected.

A delegate and the Secretary of the Yoruba Elders, asked the conference to add Oduduwa State in the list of states being planed for creation, adding that  the quest for the state dated back to 35 years. He said the area is made up of a population of 1.7 million.

At this stage, The chairman of the National Conference, Justice Idirs Kutigi reminded delegates that the morning session was largely meant to correct the minutes of the last sitting and not to make new input.

Meanwhile, there were indications that there may be an increase in the derivation formula from the present 13 per cent, as almost all the delegates at the National Conference suggested an increase of between 21 per cent and 25 per cent.

Though there were delegates who called for an increase to over 50 per cent, others called for the enforcement of the off shore rule for the continental shelf, which prescribes that states should only be entitled to oil revenue from the oil explored from their states.

In the same manner, the delegates called for a special fund of five per cent to be used for the exploration of untapped solid mineral resources in other states.

He said studies had shown that every state in the country had at least three mineral resources that can be exploited, and commended the committee on their recommendation for the creation of a Mineral Development Fund.

The former governor urged the delegates at the conference to increase the special fund for the development of solid mineral from 4.5 per cent to at least 7 per cent so that the money would be equitably distributed to all states of the federation.

According to the former governor, what becomes the benchmark for subsequent recommendations by delegates of the committee should they be set up to supervise and deploy the fund for the purpose of developing new minerals.

This, he said, would make the states become equal contributors to the Federation Account, adding that nothing less than 25 per cent on derivation will do for now.

The former National Chairman of the Peoples Democratic Party (PDP), Bello Haliru, also agreed with the report of the Committee on Resource Control, and supported Odili on his call for the increase in Mineral Development Fund from 4.5 per cent to 7 per cent, “so that in the near future, each state should be contributing equally to the Federation Account.”

He said due to the damage being brought to oil communities in the Niger Delta region, the conference should consider increasing derivation to 25 per cent on the basis of onshore oil produced by the affected states.

Haliru said the Supreme Court has already ruled that “what is drilled in the deep sea does not belong to any state but to the nation.”

Another delegate and former President of the Nigeria Economic Summit, Prof. Anya O. Anya, who spoke on the same note, recommended an increase for the derivation to 21.5 percent.

Another delegate, Chief Raymond Dokpesi, in his contribution, said the derivation should be increased to 21.5 percent.

Former Minister of Information, Prof. Jerry Gana, said every state must be empowered to develop their resources to create wealth so that they don't have to depend on the centre, describing the report of the committee's recommendation on the Mineral Development Fund as “logical and appropriate.”

On derivation, Gana appealed to the delegates to consider the major issue affecting every area such as environmental degradation in the Niger Delta, adding that if the oil producing states are given what they are asking for “some states may collapse and Nigerians may have to migrate to the Niger Delta. There should be fairness and the spirit of give and take should prevail.”