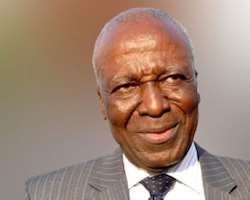 Igbeke's name was announced to the plenary by Kutigi amid applause and incomprehensible whispers from fellow delegates as the Conference was about to adjourn for the day.

The former Senator who represented Anambra North Senatorial District on the platform of the Peoples Democratic Party was earlier sighted by journalists at the beginning of the week when he came to finalize his documentation at the Conference Secretariat.

When asked, he confirmed that he has replaced Akunyili, a delegate representing Anambra State, who was a Director-General of the National Agency for Foods and Drugs Administration and later Minister of Information and National Orientation. She died on June 7, 2014, the third delegate to pass on since the inauguration of the confab by President Goodluck Jonathan in March.

She was said to have died in a specialist Hospital in India 'after a two-year battle with what was said to be cancer.'