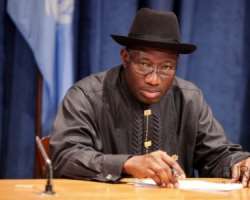 The new law repeals the 2004 Pension Reform Act No. 2 and prescribes a 10-year jail term for pension thieves.

private firms in the Contributory Pension Scheme.
The Act, among other highlights, provides stiffer penalties that would serve as deterrent against mismanagement or diversion of pension funds' assets under any guise.

With the new law, operators who mismanage pension funds would be liable on conviction to not less than ten years imprisonment or fine of an amount equal to three times the amount so misappropriated, or diverted, or both imprisonment and fine.

The law also empowers PENCOM to institute criminal proceedings against employers who persistently fail to deduct and or remit pension contributions of their employees within the stipulated time.

This was not provided for by the old 2004 Act, which only allowed PENCOM to revoke the licence of erring operators.

The signing ceremony, which took place  in the office of the President, was witnessed by Vice President Namadi Sambo, the Attorney-General of the Federation, Mohammed Bello Adoke and the Chairman of the People's Democratic Party (PDP), Adamu Muazu.

According to a working document of the Pensions Commission, the new law also makes it mandatory for a refund three times the amount embezzled by the thief.

“The Pension Reform Act 2014 has consolidated earlier amendments to the 2004 Act, which were passed by the National Assembly. These include the Pension Reform (Amendment) Act 2011 which exempts the personnel of the Military and the Security Agencies from the CPS as well as the Universities (Miscellaneous) Provisions Act 2012, which reviewed the retirement age and benefits of University Professors.

Furthermore, the 2014 Act has incorporated the Third Alteration Act, which amended the 1999 Constitution by vesting jurisdiction on pension

matters in the National Industrial Court.
“Operators who mismanage pension fund will be liable on conviction to not less than 10 years imprisonment or fine of an amount equal to three-times the amount so misappropriated or diverted or both imprisonment and fine” the document read.

The new law repeals that of 2004, as sanctions under the old law were considered no longer sufficient deterrents against infractions of the law.

“Furthermore, there are currently more sophisticated mode of diversion of pension assets, such as diversion and/or non-disclosure of interests and commissions accruable to pension fund assets, which were not addressed by the PRA 2004. Consequently, the Pension Reform Act 2014 has created new offences and provided for stiffer penalties that will serve as deterrence against mismanagement or diversion of pension funds assets under any guise,” the document read.

The 2014 Act also empowers PenCom, subject to the fiat of the Attorney General of the Federation, to institute criminal proceedings against employers who persistently fail to deduct and/or remit pension contributions of their employees within the stipulated time. This was not provided for by the 2004 Act.

The Act also empowers PenCom to take proactive corrective measures on licensed operators whose situations, actions or inactions jeopardize the safety of pension assets, which was the reverse with the 2014 Act.

It also makes provisions for the repositioning of the Pension Transition Arrangement Directorate, PTAD, to ensure greater efficiency and  accountability in the administration of the Defined Benefits Scheme in the federal public service such that payment of pensions would be made directly into pensioners' bank accounts in line with the current policy of the Federal Government.

It makes provisions that will enable the creation of additional permissible investment instruments to accommodate initiatives for national development, such as investment in the real sector, including infrastructure and real estate development. This is provided without compromising the paramount principle of ensuring the safety of pension fund assets.

The Act also expanded the coverage of the Contributory Pension Scheme, CPS, in the private sector organizations with three employees and

above, in line with the drive towards informal sector participation.

The 2014 Pension Reform Act reviewed upwards, the minimum rate of Pension Contribution from 15 per cent to 18 per cent of monthly

emolument, where 8 per cent will be contributed by employee and 10 per cent by the employer.

“This will provide additional benefits to workers' Retirement Savings Accounts and thereby enhance their monthly pension benefits at retirement”.

In the event of loss of jobs, the new Act reduces the waiting period for accessing benefits from six months to four months. This is done in order to identify with the yearning of contributors and labour.

The Pension Reform Act 2014 makes provision that would compel an employer to open a Temporary Retirement Savings Account, TRSA, on behalf of an employee that failed to open an RSA within three months of assumption of duty. This was not required under 2004 Act.