Pistorius had no mental disorder -Report 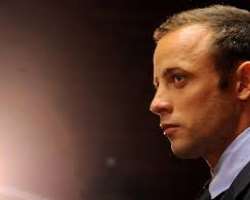 Oscar Pistorius did not have a mental disorder when he killed his girlfriend, a psychological report said as his murder trial resumed.

The report was presented following an evaluation into his mental health.

His defence team has argued he was suffering from an anxiety disorder at the time of the shooting.

The athlete denies deliberately killing Reeva Steenkamp. He says he shot her accidentally in a state of panic after mistaking her for an intruder.

Both prosecution and defence have accepted the results of the report.

Pistorius would not have been criminally responsible for the shooting if the report had stated that he was mentally ill, says the BBC's Milton Nkosi who is in court.

The court is hearing from Dr Gerry Versfeld, who amputated Pistorius' legs when he was just 11 months old. He had been born without the fibulas in both of his legs but went on to become an Olympic athlete.

Versfeld is testifying about the impact of the disability on Mr Pistorius, 27, and to what extent he can walk without his prosthetic legs.

The defence is expected to finish presenting its evidence in the next few days.

Steenkamp, a 29-year-old model and law graduate, was shot through a toilet door at Pistorius' house in Pretoria on Valentine's Day last year.

The couple had been dating for three months.
'Mr Pistorius did not suffer from a mental illness or defect that would have rendered him criminally not responsible for the offence charged,' said state prosecutor Gerrie Nel, reading from the psychologist report.

The prosecution requested the evaluation after a defence witness said the double amputee was suffering from Generalised Anxiety Disorder.

Pistorius, 27, underwent a month of tests as an outpatient at Weskoppies psychiatric hospital in Pretoria.

There are no juries at trials in South Africa, so the athlete's fate will ultimately be decided by the judge, assisted by two assessors.

If found guilty of murder, Pistorius, who went on trial on March 3 this year, could face life imprisonment. If he is acquitted of that charge, the court will consider an alternative charge of culpable homicide, for which he could receive about 15 years in prison. BBC