Brazil beats Chile in shootout in a grueling encounter 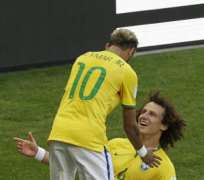 Neymar scored the winning penalty Saturday to give Brazil a 3-2 shootout win over Chile in the second round of the World Cup. The match had ended 1-1.

Neymar scored the third penalty after David Luiz and Marcelo also scored from the spot.

The match had ended 1-1 after extra time on Saturday.

Brazil opened scoring after 18 minutes when Thiago Silva nodded on Neymar's corner and David Luiz scored from that effort.

Chile responded 14 minutes after when sloppy defending let in Alexis Sanchez, who fired past Julio Cesar from close range.

Hulk had a goal disallowed for using an arm to control the ball and although Brazil dominated the second half and extra time, Chile almost stole it in the final moments when Mauricio Pinilla hit the bar.Brazil, who beat Chile 3-0 at the same stage four years ago in South Africa, will face Colombia or Uruguay in the quarter-finals.

Sanchez particularly showed his star quality for Chile as he was most deadly for Chile.

Brazil will next face either Colombia or Uruguay in the quarterfinals.