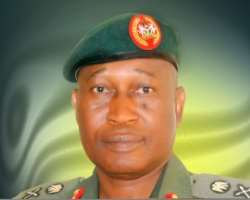 The Defence Headquarters said Thursday that more explosives were seized from two suspects believed to have coordinated the Wednesday bombing of Emab Shopping Plaza in Wuse, Abuja.

Defence Spokesman,Major General Chris Olukolade, while throwing more light on the arrest of the suspects, said that bystanders at the scene of the explosion alerted soldiers on patrol to the two suspects who were speeding off on a power bike.

Olukolade said, in a statement, “The soldiers swung into action engaging the escaping suspects and fatally wounding one of them who fell with his bag as the motorbike rider still made efforts to escape through the crowd.

“The bag recovered from the suspect was later confirmed to contain a package of IED and other accessories including stop clock, mobile phones and other materials used for setting off explosives. The suspect who was shot by the soldiers finally died in the hospital as he defiantly yelled “people will die! people will die!!

“After the incident, 21 persons were confirmed dead while the wounded victims are receiving treatment in various hospitals. Two other suspects also arrested at the scene of the explosion are currently being interrogated.”

The statement added, “In another development, a makeshift camp of terrorists in Miyanti and Bulungu have been sacked during a raid on terrorists' hideouts, in the area. Over 50 terrorists died in the clash. A fuel dump used for storing fuel for their operations as well as vehicles including Toyota Hillux trucks, Peugeot cars, and 7 motorcycles were destroyed in the raid, while 15 rifles, 11 machine guns and hundreds of ammunitions were captured by the troops.

“In a separate encounter around Duguri near Nigerian – Nigerien border, troops of the Multinational Joint Task Force stormed a terrorists' hideout in a raid operation and recovered 18 rifles, 5 General Purpose Machine Guns, 25 hand grenades and IED making materials. A total of 53 terrorists died in the encounter while the troops lost 2 men and 5 others suffered varying degrees of injuries.”

According to the defence spokesman, “ a suspected gun runner is presently undergoing interrogation in Plateau state. He was apprehended during a cordon and search operation by troops tasked to mop up illegal arms in the state.

“15 suspects have also been taken into custody in Abuja after a raid that resulted in the recovery of 7 rifles, pistols, swords and other weapons. Military operations to track armed gangs will be sustained in various locations.”

Meanwhile, more prominent Nigerians have condemned the dastardly act of the terrorists, which led to the loss of many lives including a staff of the New Telegraph.

Information Minister Mr. Labaran Maku, in a condolence message to the management and staff of the New Telegraph Newspaper over the death of their Managing Editor, Mr. Suleiman Bisalla. said he was saddened by the demise of Mr. Bisalla along with twenty other Nigerians in the bomb explosion at Emab Plaza in Wuse Two, Abuja.

The minister said he knew Bisalla when he was the Political Editor of the Daily Trust Newspaper and described him as a dedicated and talented professional who acquainted himself satisfactorily as a reporter and editor.

Maku urged the staff of the New Telegraph Newspaper not to be demoralised by the sad and unfortunate incident, but to remain focused in condemning acts of terrorism in their reportage with a view to arousing public consciousness against terrorism in the country.

In addition, the minister enjoined the newspaper to deny terrorists space to ventilate their divisive and hate messages which aimed at causing panic and setting the citizens of Nigeria against one another.

He prayed God to comfort the family of the deceased and the entire management and staff of the New Telegraph and grant them the fortitude to bear the irreparable loss.

Former Governor of Abia State, Dr. Orji Kalu, also expressed his heartfelt condolences to the families of fellow Nigerians who were killed in Wednesday's explosions which occurred in Abuja, Lagos and Adamawa resulting in the death of about 21 people, including New Telegraph Managing Editor, Mr. Suleiman Bisala, and scores of others injured.

Kalu, in a statement issued on Thursday by his Media Adviser, Mr. Ebere Wabara, said “the consistent killing of people and wanton destruction of property by terrorists were getting out of hand and could undermine the country's sovereignty if not confronted headlong.”

“The time has come for the government to throw in everything in halting this spiraling carnage. The situation is worsening and calls for a drastic solution. Nigerians must rise and collectively tackle this mindless waste of precious lives,” he said.

. Kalu, who condoled particularly with the Bisalas whose son died on active duty in the service of his fatherland, implored God to comfort the bereaved and grant the country the enablement to find a lasting solution to the terrorists' menace and other acts of insurgency.

Reacting to the incident,the Jama'atu Nasril Islam(JNI) and the Arewa Youth Forum (AYF) have expressed sadness over the recent bomb blast in Abuja in which many people were killed.

The two bodies condemned such terrorists acts in which lives of innocent souls were always affected.