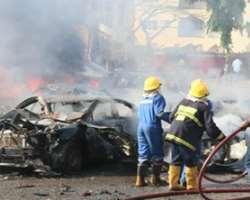 The Boko Haram Islamist terror group on Wednesday attacked the Federal Capital Territory (FCT), Abuja, barely two months after it struck the out sketch of the city in one of its most deadly attacks of recent years.

The terrorist set off bomb at the ever-busy Emab shopping plaza, Wuse II, leading to the death of 21 with many others wounded..

The Aplaza was attacked at about 4.00 pm.
Although eyewitnesses put the casualty figure at 30, the Force Public Relations Officer,  Frank Mbah, told journalists at the scene that 21 people   died and 17 were injured.

Mba's figures were however contradicted by the Federal Capital Territory Minister, Bala Mohammed, who said that 12 people were killed while 35 were injured.

Mba had also said that the explosion destroyed 17 vehicles outside and within the complex.

The police authorities have ordered increased surveillance in and around the Abuja metropolis.

The statement added that the Police Bomb Disposal's Squad has commenced post-blast analysis as part of the general investigative process.

The Managing Editor (North) of the New Telegraph Newspapers, Sulieman Bisala, was killed in the attack.

Bisala, who hails from Plateau State, had worked in various media organisations before joining the New Telegraph as a pioneer staff. He was an Editor with the Daily Trust newspaper.

According to an eyewitness account on the Abuja blast, a bomber had attempted to force his way into the plaza when the bomb exploded as security officers manning the   gate attempted to stop him.

The explosion shattered many of the shops and other facilities within the surroundings.

Those worst hit in the bomb blast were petty traders who often sell banana, orange and groundnut within the entrance of the plaza.

Nearly all the sellers are women and young girls who hawk their goods around the vicinity of Emab and Banex plazas.

Some of the deceased brought into the hospital had their bodies dismembered beyond recognition.

Officials of the hospital were seen trying to resuscitate some of the victims who were severely burnt.

Expectedly, the scene of the explosion had been cordoned off by security operatives as evacuation of persons continued.

One Bomber Killed, Another Arrested
The National Briefing  Centre, Abuja has confirmed that one of the suspected attackers in bomb explosion has been arrested while a second suspect was killed by soldiers.

The Coordinator of the centre, Mr. Mike Omeri, said the dead suspect was killed by soldiers as he tried to escape on a power bike.

Omeri said emergency services had been deployed to ensure that the injured were attended to immediately.

Meanwhile, the federal government has said security agencies have fully mobilised to the scene of the bomb blasts which rocked Emab Plaza.

Omeri, in a statement shortly after the blast, urged residents to go about their normal activities, as he said the situation had been brought under control.

“The National Information Centre (NIC) has confirmed a bomb explosion that occurred between the popular and busy Bannex and Emab Plazas situated in Wuse II district of the Federal Capital City. Residents of the FCT are advised  to remain calm and go about their normal business. Security agencies have fully mobilised to the scene of the incident and are handling the situation,” he said.

Omeri  stated further  that every step was being taken by the government to check the activities of insurgents in the country and advised Nigerians to remain vigilant and conscious of movement of unidentified people around their areas.

He expressed the sympathy of the federal government to the families of those that lost their lives just as he wished the injured speedy recovery.