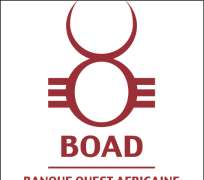 DAKAR, Senegal, June 25, 2014/African Press Organization (APO)/ -- The Board of Directors of the West African Development Bank (BOAD) (http://www.boad.org) held its 93rd ordinary session on Tuesday 24 June 2014 at the premises of the Central Bank of West African States (BCEAO) in Dakar under the presidency of Mr Christian Adovelande, Chairman of the Board of Directors and President of BOAD.

During this session, the Board, having approved the minutes of its 92nd meeting held on 26 March 2014 in Lomé, examined and approved the report on operations for the mid-term review of the financial forecasts for the 2014 financial year.

The approved loan recommendations relate to the following operations:

• Partial financing of a project to reinforce the drinking water supply system in the town of Tafiré and its neighbouring communities in the Ivory Coast. The project aims to increase drinking water production in the area concerned from its current level of 72 m3/day to 1,500 m3/day with implementation of the infrastructure planned for 2016 and to 3,600 m3/day by 2035. It will also allow the drinking water supply system to be extended to the towns of Badikaha and N'golodougou to supply their approximately 40,000 inhabitants by 2020 and allow the prevalence rate of water-borne diseases linked to the consumption of non-potable water to be reduced by 50%. Loan amount: 2.342 billion CFA francs.

• Partial financing of a project to install a technical landfill centre for solid waste in the town of Lomé in Togo. The centre will cover a surface area of approximately 192 hectares and will have capacity for 300,000 tonnes of waste per year in line with international standards for a minimum period of 20 years. The implementation of the project will thus contribute to improved protection of the urban environment. Loan amount: 6 billion CFA francs.

• Consolidation of the outstanding balance of the initial loan for the Dakar - Diamniadio toll motorway project with the partial financing of its extension to Blaise Diagne International Airport (AIBD) by the joint-venture company Société Eiffage de la Nouvelle Autoroute Concédée (SENAC) SA in Senegal. BOAD provided partial financing of 15 billion CFA francs for the construction of the Dakar – Diamniadio toll motorway, which entered into operation on 1 August 2013. To the outstanding balance of this initial loan, BOAD agreed to add a new loan of 5 billion CFA francs for the extension of this motorway to the new Blaise Diagne International Airport (AIBD) located in Diass, 47 km from Dakar. Consolidated amount of the Bank's financial assistance: 18.498 billion CFA francs.

• Short-term loan to the Senegalese government for the partial financing of the Emergency Rural Electrification Programme (EREP). This programme is intended to help the government meet its target of increasing rural electrification from 26% in 2013 to 60% in 2016. Specifically, the current operation, co-financed with the local banking system, involves the electrification of 150 villages spread across 13 regions in Senegal. Loan amount: 5 billion CFA francs.

The Board of Directors also approved the establishment of a line of credit for BOAD with the Islamic Corporation for Development of the Private Sector (ICD). This financial assistance, which represents the ICD's first operation in West Africa, will strengthen BOAD's capacity for intervention in the private sector, mainly with regard to SMEs.

The Board of Directors also issued a favourable opinion on the status of the recovery of receivables on BOAD loans as at 22 May 2014. It further acknowledged the following documents:

Bringing proceedings to a close, the Chairman Christian Adovelande thanked the Senegalese authorities on behalf of the Board of Directors for the warm and brotherly welcome extended to the Directors as well as for the material and organisational preparations made, which allowed this session to be held in the best of conditions.

Directorate of Communications and Public Relations